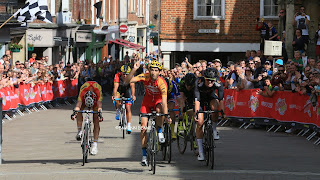 Ian Field (Hargroves-Ridley-Montezuma's) won the Winchester criterium, edging out the Andy Shackel (Team Wiggle) and teammate Jody Crawford at the end of a great day of bike racing on the Hampshire cobbles. Despite being in the middle of his "winter training" the national cyclo-cross champion was "up for it" from the gun, forcing the pace and splitting the race early on reducing the front group to first 14, then a more manageable eight. 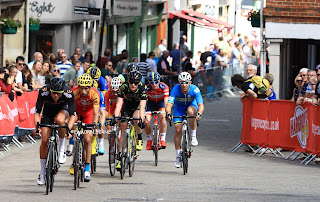 It was not all Field, Andy Shackell, Jody Crawford, Mike Smith & Lee Smith (Nuun-SigmaSport London), Calum Croft (Latchem Sunwise RT), Benjamin Marks (Morvelo Basso), Oscar Hutchings (VC Equipe-Flix) & Jaimie Franklin (VC Venta) did their bit to keep the pace high. Hutchings got caught up with lapped riders and lost contact, Franklin, punching above his weight and riding well, came down on a corner and fell back as the pace was lifted again, Croft probing on every bend. Field had won a kermesse in Belgium on Friday night and added another win to his "winter" hitting the front at the bell and keeping his head down, the windy, cobbled finish, too much of a deterrent to the willing Shackel. 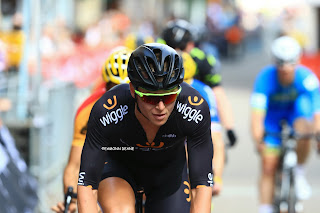 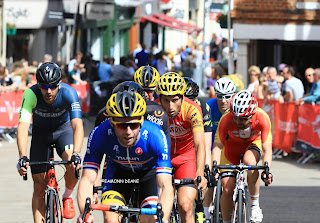 Ian Field
"My sponsor Pete Hargrove's asked me to come down and do it so i had to put on good show. I enjoy crit racing, i went to Belgium this week to get my legs going, its only my third road race of the year, i did no know how i would be, sprinting out of the corners and stuff, i am in the middle of my winter training as such. I just train for cross, luckily i get to do this for training. i am lacking in fitness a bit at this time of the year, the top end, jumping out of corners, but that's all basically cross is so it transfers really well .I wanted to split it down a bit, it can get a bit chaotic on a tight course like this. I went to the front with a lap to go to lead Jody out but with that headwind on the finish straight people were struggling to come round, yeah i just kept my head down. Its really good, really good, nice crowd, good circuit, really good fun"

on June 11, 2017
Email ThisBlogThis!Share to TwitterShare to FacebookShare to Pinterest