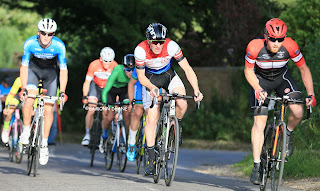 The Weymouth Crit series had been hailed as a complete success by host club Mud, Sweat n Gears. During the four events there have been races which included mainly cat3 and cat 4 riders, with a special race for a cat 2/3 mix at the second event. The final event was held on the 13th June with James Horton *(VC ST raphael) taking the win it.Throughout the series a real mix of riders entered, but good riding and consistency shows through in the end. All riders who scored points during the series were entered into the overall series ranking. Coming out on top was 16-year-old Chris McLaughlin of the Uk Biking\Bournemouth Cycleworks\TREK team. During this time Chris show cycling maturity well above his years and deservedly won the series title for 2017. In second place was the Mud, Sweat n Gears team manager Darren Orchard. Having missed one event Darren was happy with the result of 2nd overall. When asked about the series winner Darren described Chris as ‘A really nice guy who has a great mind for the sport. At such a tender age he will go far if he can keep his focus.’ In third place we have Christopher Wilson of Uk Biking\Bournemouth Cycleworks\TREK team. Chris started out in the fourth cat races this season, but once promoted he still managed to finish an impressive 4th place in his first cat 3 appearance at the park and ride.
Mud, Sweat n Gears would like to than all of the volunteers that help make the series such a success. Special thanks also goes out to Dorset County Council for ensuring the use of the park and ride for these events. Also we would like to thank all the riders and spectators who attended the park in the races themselves. Without you the series would have been nothing.
As for the future. We hope to be putting on some races here later in the year that could really help those riders who may well be chasing points. We expect to cater for riders from cat 4 to cat 2 over a few events in September so please keep an eye out for further details.
Overall series results table below


on June 27, 2017
Email ThisBlogThis!Share to TwitterShare to FacebookShare to Pinterest