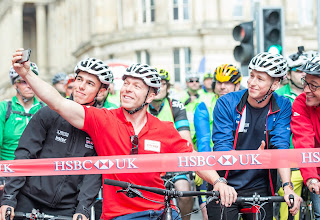 Great Britain’s joint greatest Olympian, Sir Chris Hoy, has hailed the impact of HSBC UK City Ride, in inspiring the nation to take up cycling.
Press Release
The series of 14 traffic free events kicked off on 11 June and has visited Birmingham and Nottingham, with thousands of people turning out to enjoy riding on the traffic-free routes.

The next stop on the nationwide tour will see the event visit Southampton on Sunday and six – time Olympic gold medallist, Hoy said:

“The HSBC UK City Rides are absolutely vital to encourage people to get back on their bikes if they haven’t ridden for a few years, or for young cyclists to get out and gain some confidence by riding out on the roads. The key is for people to just enjoy themselves, get on their bikes and make cycling part of their everyday routine.”

“The fact it (cycling) can reduce congestion, it can reduce the pollution and improve the health of the people, it’s just so important. It seems obvious and it seems like the key way to take the strain off the NHS and from every perspective more people on bikes has got to be a good thing. It’s just about keeping the pressure on the people that make the decisions.”

The key ambition of HSBC UK and British Cycling’s partnership over the next four years is to inspire two million people to cycle by 2020 and make cycling the most popular activity and sport of choice in the UK. Illnesses like diabetes currently place a huge strain on the finances of the NHS and Hoy has seen first-hand how cycling can transform people’s lives for the better.

Hoy says it’s absolutely vital that his success and that of the Great Britain Cycling Team, who have topped the medal table at the last three Olympic and Paralympic Games is used to inspire people to make cycling part of their everyday lives. 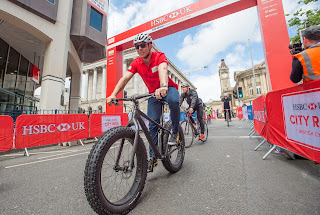 on June 21, 2017
Email ThisBlogThis!Share to TwitterShare to FacebookShare to Pinterest