Friday 28thJan 2011
· Stuart Bowers (Hargroves Cycles) was in imperious form as he cruised to victory in the final round of the Wessex Cyclo-Cross League. Bowers has had a successful winter season and topped it off with an easy win, beating teammate Andy Hargroves by over 4 minutes. Held in the grounds of Oxford Brookes University, Bowers enjoyed the technical course,” What a great course, that’s what Cyclo Cross used to be like back in the day” Said the Sturminster Marshall based Bowers. “A real mix and it played to my technical strengths, I was coping with riding, where others were floundering all over the place” Sponsor, Peter Hargroves worked hard the in pits, ensuring the bikes were kept clear of mud. Bowers, who works as a cycling journalist, finished 6th in this year National Trophy series and 5th in the National Championships.
· Newly crowned national under 23 Champion Luke Gray (Hargroves Cycles) will pull on Great Britain colours this weekend at the World Championships in St-Wendel, Germany. The 18 year old from Broadstone is under no pressure and the experience of top level racing will stand him in good stead for the future. Teammate and man of many talents, Stuart Bowers has not been selected but will be in Germany working as a mechanic for the GB team.
· Gordon Skillen (Poole Wh) had a string of 3rd places in the latest round of the Calshot Track league. Skillen had crashed heavily the previous week after a clash of wheels but rode consistently in the Scratch, points and the unknown distance to leave himself lying second in the overall standings. New Forest CC youngster Hugo Walters was also in the action with two 3rd places in the youth1km time trial and the point’s race and a 1st in the warm up race.
· This weekend’s 65 mile Purbeck reliability trial, promoted by the Bournemouth Arrow, has been cancelled.
on January 28, 2011 No comments:
Email ThisBlogThis!Share to TwitterShare to FacebookShare to Pinterest 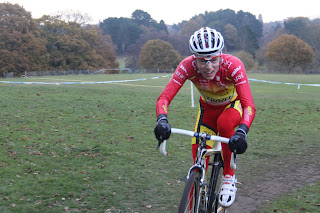 
At the start of the cross season, Luke Gray (Hargroves Cycles) set himself the targets of National U23 champion and selection for the world championships. With both those boxes ticked the 18 year old travels to St-Wendel, Germany this weekend under no pressure. Gray has enjoyed a successful winter with several wins including the South of England title and 2nd place in the National Trophy series (U23), finishing 8th in the senior standings. Gray was forced to pull out of round 2 at Chantry Park, Ipswich, due to illness. Those lost points possibly cost him the U23 series crown. Speaking of his national title before he left for Germany, Gray said “I did what I set out to do, stay upright, avoid the crashes and win the National Title” It was his 4th Title, having already won the U14, U16 and Junior Crowns. “It’s just the senior title to win and I will have the full set” and you know he is not joking. As a first year senior these world championships are all about gaining experience so talk of medals is perhaps optimistic. Ask Luke about the future and there is talk of more GB representative honors, a professional contract and world titles. The drive, optimism and enthusiasm of the Hargroves Cycles rider are infectious.
Gray plans to take a short break after the world championships and spend the summer racing on the road in preparation for next winter. “I have applied for Dave Rayner funding as I plan on being based in Belgium for the Cyclo cross season”. The former GB XC Mountain biker has put his further education plans on hold, “So I am now a full time cyclist” Father Rob fully supports his ambitious son and is a regular fixture at all of Luke’s races working hard in the pits. With long time Sponsor, Peter Hargroves fully behind him, Gray could be equipped to go all the way
on January 28, 2011 No comments:
Email ThisBlogThis!Share to TwitterShare to FacebookShare to Pinterest 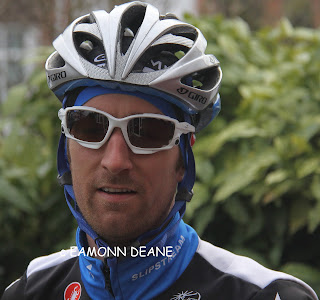 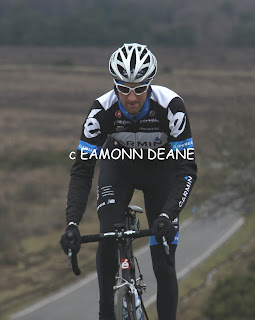 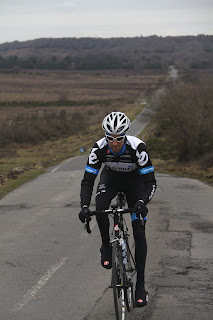 
I caught up with Garmin-Cervelo Professional Daniel Lloyd just back from a ten day training camp in Spain. With the new season just around the corner he was putting the finishing touches to his winter preparation. A 5 Hour ride on Sunday was followed by 2 hours easy on Monday; it felt hard enough to me but in his new team kit and riding smoothly, it was obvious Lloyd was in good shape. As we rode through the New Forest on a dull January day, Dan reflected back on last season. A year that saw him ride the Giro d’Italia for the second time and the Tour de France. “I loved riding the Grand Tours and in particular the Tour de France, however I had done so much racing by July last year that I don’t think I was in top form. Other guys were saying they thought the Giro had blunted their form for the Tour but none of them had ridden the Dauphine in-between like I had” I felt good at Dwars Door Vlaanderen in the spring and rode away from some big names” but I never felt I had the legs of 2009. Lloyd is perhaps being hard on himself; he crashed heavily on stage two of the Tour de France as a host of riders came down on a descent made slippery with oil from a motorcycle outrider who had also crashed. “I left quite a lot of skin on the road and was hampered with a groin strain for the first ten days.”
Looking forward to the coming season, Daniel talks passionately of the Belgium Classics, particularly the Tour of Flanders, you get the impression he loves this race. Success would mean “Still being up there to help the team leaders after 220kms, over the Muur and the Bosberg”. He knows it will not be easy “With the Talent we have in the team competition for places is going to be tough, with Thor (Hushovd) in the rainbow jersey it will be a privilege to be on the start line” I am targeting good form for Paris-Nice, where we will have both GC riders and sprinters.” His early season programme will also include Le Tour Mediterraneen, Tour du Haut Var and Kuurne, Brussels, Kuurne. “After that, it will just depend how my form is” Ahead of that is another training camp Girona, Spain.

This season however, the Grand Tours may not feature for Lloyd, with his wife Lorraine expecting their second child in May his thoughts may be elsewhere come the Giro. “The team time trial at the tour is a real target for us and its not really my strength, I wouldn’t want to be the weak link” What about the Vuelta a Espana? “Yes possibly, and the worlds” The Olympics? “Of course, it is a huge goal to represent GB in London for the race but there are so many good Pros from Britain now that I will have to do something really special to earn my place”

I ask him what he thinks his strengths and weaknesses are. The reply is uncomfortably honest “Nothing and Nothing, I’m not really, really good at anything and I am not really, really bad at anything, its probably why it took me a while to land a contract with a top flight team but it is also the reason that they find me valuable now that I’m here ”

I find myself adding some answers of my own, determined, focused, hard working, professional, team player they read like strengths to me. Sporting graveyards are littered with talent that lacked application. His honest, relaxed, laid back manner and willingness to “do the sponsorship stuff” must be a joy to his Directeur Sportif

The 2011 season will be his 8th year as a Pro and his 10th as a full time bike rider since racing in France in 2001 as a twenty year old. In a career that has taken him around the world, Lloyd hopes to continue in the Pro Peloton for another “8 or 9 years” and “with not too many hard miles in his legs” believes he can, and why not? he clearly loves his job.


Those of us of a certain age might well look at the former part-time window cleaner and think “I could have done that” the reality is certainly somewhat different, the message for aspiring younger riders however is patently clear, Don’t dream the dream, Chase the dream! Live the dream!
on January 28, 2011 No comments:
Email ThisBlogThis!Share to TwitterShare to FacebookShare to Pinterest
Labels: Daniel Lloyd, Garmin Cevelo, New Forest
Newer Posts Older Posts Home
Subscribe to: Posts (Atom)