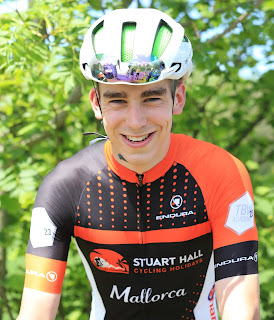 Sam Clark (TBW23/Stuart Hall Cycling) impressively won the Portsmouth North End Summer Road Race at Owslebury in Hampshire on Saturday (5th) to add to his growing reputation. The twenty year old from Petersfield jumped across to early leader Paul Burton (Paceline RT) and immediately went to the front forcing the pace, Burton had burnt too many matches trying to escape the still fresh bunch, by the time he was out of sight he was running on empty and quickly back in the fold, Clark pressed on alone pulling out a gap of 55 seconds and with a couple of teammates stalling behind, took  a well-deserved  win on Salt Lane. “It was such a good feeling” 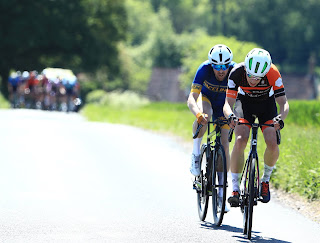 Cramp in the last few miles slowed Clark but he was able to measure his effort with little panic “  I live local so i have ridden the roads so much that i know the course like the back of my hand so i definitely had that to my advantage. 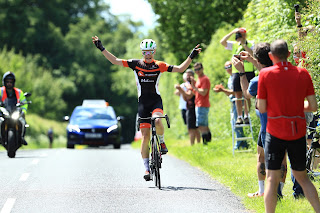 Victory on the Milburys course came just 4 days after an impressive win at Thruxton and Clark placed 4th at the Portsmouth clubs open 25 on Sunday (6th), a puncture that took him out of the winning break at Chitterne a coupke of weeks back now long forgotten.  Clark has been working with TRAINSHARP coaching and puts his form, fitness and the confidence that always  comes with those two elusives down to this new alliance…..

“The process was a real eye opener as until then my zones were just calculated on the old school 20 minutes -5% FTP which I soon learnt is very inaccurate and can give you zones that are not actually realsistic. TRAINSHARP carried out a blood lactate test to assess my LT1 and LT2 levels , a ramp test while measuring VO2 and my  minimum aerobic power, the even came out with me and watched me complete a max effort up a local climb to assess my riding style as well as taking anthropometric measurements to calculate body fat etc, so it’s the full package I honestly cannot recommend them enough, they have played a massive part in my development as a cyclist” 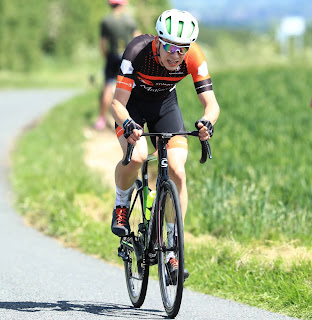 Targets for the year include a National B win, The Severn Bridge race on 27th June will be his next opportunity and the National U23 Championship: “it’s an optimistic target as there are some really strong U23’s at the moment who are racing in the pro peloton etc so I’ll have to be on top form when I go there but I’ve always wanted a stripey jumper and that kind of result would likely get me onto a pro team which is the ultimate goal.”

Clark works two days a week, a bike shop mechanic in Haselmere, the other 5 days are for training, “In an ideal world I would ride full time but cycling isn’t the cheapest sport so I’ve got to do something to make some money. My long-term ambition is to make it to the world tour peloton, obviously there’s a few steps between where I am now and there and an awful lot of hard work but that’s ultimately what I want to be doing.”

Cannondale SystemSix Hi-Mod .. “its a super fast bike and with all the hidden cables it looks very sleek.”

Enve 3.4 rims, Chris King R45 hubs  “they are just dreamy to ride on the bike all built up is like a rocket ship, super fast and still climbs very well due to the fairly shallow wheels.”

Tubeless Continental GP5000 tyres  “I really like them to be honest, they roll very fast and have the added bonus of puncture protection which is something that I definitely want while racing. And then recently I’ve been experimenting a bit and waxing my own chains which I used at the PNE road race, I can’t say I actually notice the difference but it’s supposed to be faster.”