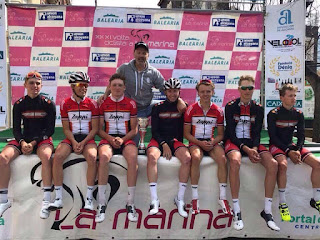 Crossing the Mediterranean It feels like only yesterday I was writing my February column which is made more odd since I remember telling myself March was going to be a bit of a slog. The reason I said that was because the way the month was built. We had a small race in Spain followed by a tricky move to Italy where we'd participate in our first serious races of the year. To me, this felt more like admin than serious racing; a warm up for the serious UCI level races later in the season. However, I found the last 31 days to fly by having been so full on. The final race in Spain actually landed on my birthday and being a hilly race, I was hoping for a good result. We'd completed a very heavy block of training the week beforehand where I had been really suffering every day compared to the other boys. But in the race I felt fresh and picked my chance to attack with 10km from the line. The next 12 minutes were not pleasant but I held off the bunch to win by 28 seconds. It may not have been the biggest race in the world but as any racer will know, a win is a win and can do miracles for your moral. 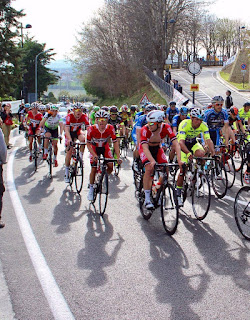 Italian racing, however, is something never to be underestimated. Despite being satisfied with our preparation, the trip over to Italy hadn't been ideal. A total of 10 hours of driving and a 24 hour ferry had dampened all of our legs and our first race did not go to plan. It was a tough bullet to bite. The next week was the U23 version of Strade Bianche. Another big race with a lot of international competition made the race hard and the gravel sectors wreaked carnage from the start. Another poor performance from myself was not welcome and any impression of having a straightforward path to results had been shattered. The house in Italy where we're based is a lot more simple compared to Spain. With fewer household appliances and a much smaller space, it's hard not to find day to day life more difficult - especially without any wifi. We're located on the East coast not far from the hills but with plenty of flat too. The area is therefore superb for training due to its varied terrain. This is made better by the oddly warm temperatures for this time of year. Yet despite all this, I couldn't help feeling disappointed to leave Spain. In Altea, the people were laid back and relaxed. The general friendliness of where we rode made a huge impact on how I felt on the bike. In contrast, Italy feels rushed. The whole area we live in seems to be in a constant state of panic. The road surfaces are far from ideal, much of our town is still closed until summer and to top it off, the abuse on the road from cars dwarfs that of the UK. Plain and simply, the overall standard of driving is much lower. Safe is not a word I'd use to describe when I'm out riding. Looking ahead to April our calendar is packed full of under 23 specific UCI races. Our first is Trofeo Piva, probably the hardest of the lot due to the very hilly course and competitive field. It's a race I had been looking forward to, having seen the success of former Zappi's rider (now Team Wiggins) James Knox take a top 10 two years ago. But there are doubts over my current fitness and race form since wasting my earlier opportunities. Accompanied by the fact I've been gaining weight, I'm not holding my breath for anything special. Beyond the first weekend though we have under 23 Liege Bastogne Liege to aim for and some more under 23 Italian UCI one day races. It's in the next two months that will really dictate the pattern for my season. Both April and May are full of races where just one result may be enough to be noticed by a big team. Even the non-UCI ranked races here hold very similar value due to the number of national teams and continental level teams coming to Italy to race. The competition is always red hot and there are no shortcuts. I can only hope that the preparation the whole team went through at the start of the year will begin to pay off, now, when it really matters! 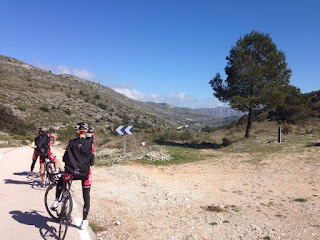 A Long Ride with the Boys!

on April 01, 2017
Email ThisBlogThis!Share to TwitterShare to FacebookShare to Pinterest