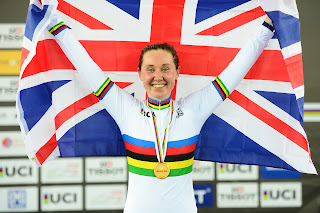 Archibald said: "I feel really privileged to pull it off. It (the points race) was an unbelievably grippy race, I really thought I'd lost it in the middle point but I pulled it out of the bag.

"It feels very strange, I'm used to having my girls, my team-mates, around me it's odd to celebrate by yourself but I'm looking forward to catching up with them at the hotel." 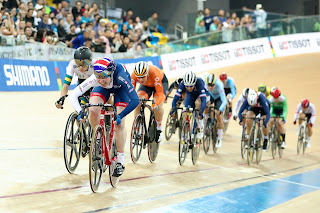 In his debut world championships, Mark Stewart claimed an impressive top ten finish with a result of seventh overall in the points race. In the individual pursuit, senior academy rider Mark Bostock finished in 13th place with a time of 4:22.122 whilst Andy Tennant stopped the clock at 4:22.664 to finish in 14th position.

Ryan Owens progressed through to the quarter finals of the sprint event taking place tomorrow whilst Callum Skinner exited the event in the 1/8th finals.
Courtesy of British Cycling & SW PIX
on April 14, 2017
Email ThisBlogThis!Share to TwitterShare to FacebookShare to Pinterest