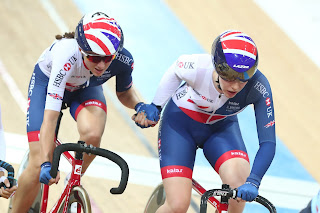 Barker said: "I was nervous because we'd only ridden one each before, we didn't know what to expect.

"I'm not surprised at all by the Belgians winning - they are a Madison nation, so hats off to them, they were impressive." 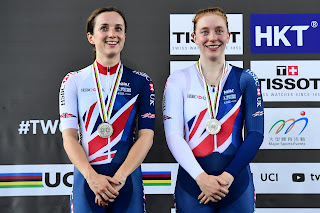 Newly crowned omnium champion Katie Archibald narrowly missed out on a medal ride in the individual pursuit finishing in fifth place whilst senior academy rider Eleanor Dickinson broke her personal best time by five seconds to finish in 12th place with a time of 3:34.982 seconds. On the men’s endurance side, Chris Latham was in action in the omnium, finishing in 18th position overall.

Great Britain Cycling Team have now won four medals - one gold, two silver and one bronze - in Hong Kong with one more day of action left of the competition.
Courtesy of British Cycling, SW PIX

on April 15, 2017
Email ThisBlogThis!Share to TwitterShare to FacebookShare to Pinterest