Shut Up Legs Chartity Ride, Jens Voigt Back in the New Forest! 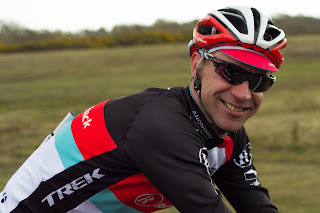 Jens Voigt is coming back to the New Forest in autumn 2014!
Following the success of last year’s New Forest ride that raised £10,000 for charity, Jens couldn’t wait to come and do it again! As if the legend, whose legs are almost as famous as he is, needed any introduction, Jens www.trekfactoryracing.com is already well in to his final year of racing and showing a new generation how to suffer. Still arguably the most popular professional in the peloton, the two-time yellow jersey wearer and perennial race winner shows no signs of slowing down. Last year, at 41, he won stage 5 of the Tour of California, beating Tyler Farrar, Thor Hushovd and Peter Sagan, so for anyone who has enjoyed watching his fighting spirit, this is a ride not to miss.
On September 20th 2014, there will be another charity ride in the New Forest for www.epilepsysociety.org.uk and www.oakhavenhospice.co.uk. Ride organizer and local fundraiser Stuart Grace (GA Cycles) is the father of Amy, who has suffered with Epilepsy, ADHD and learning disabilities for over 15 years, and has a relative receiving care in the hospice. Throughout their long-standing friendship with Jens, Stuart and Amy have received incredibly generous support, and he has regularly helped to raise money for a very worthy cause. Jens has made some time in his final season’s hectic racing schedule to come over and ride this year’s event, saying "After a great start to our charity ride last year we want to make it happen again, and together with Amy raise money for two charity organisations in 2014.”

How to take part :
1) Ride the event, which will cover approximately 45 miles with 100 riders in groups of 10, leaving at five-minute intervals. Stuart and Jens will leave with the first group and drop back to join the following groups at designated intervals. Groups will ride at about 16-18mph, and be small enough that everyone has the chance to ride with Jens.
Entry to the ride will cost £100, and includes free food and drink in the event headquarters after the ride, a unique and collectable T-shirt signed by Jens, and free automatic entry in to a prize draw of cycling goodies from numerous local retailers and Trek. Of course Jens will be available for a chat throughout.
There are 100 rider places only, available on a strictly first come first served basis, with full payment to be made no later than 30 days before the event, or your place will be offered to another applicant.
To limit the risk of gatecrashers, a postal communication to accepted riders will release more details of the event nearer the time, and it’s in your own interest to keep it to yourself!
2) Non-riders can purchase a £20 wristband that entitles you to meet Jens back in the headquarters after the ride. Amy will have photos of Jens available, which he will sign for a donation to her Wishing Well.
This is a unique chance to meet and ride with THE ultimate super domestique, and help raise money for a good cause, but those who are unable to attend the event can still help in a big way by going to www.justgiving.com/teams/ShutupLegs We would like to thank Trek Factory Racing for their help in letting Jens come to the UK during what has been a busy season for him.
Contact Stuart Grace stuart_singlespeed@hotmail.co.uk
* All riders are expected to have personal insurance either with the BCF or CTC as the organisers will not be held responsible for any accidents or injuries incurred during the day.
on June 07, 2014
Email ThisBlogThis!Share to TwitterShare to FacebookShare to Pinterest