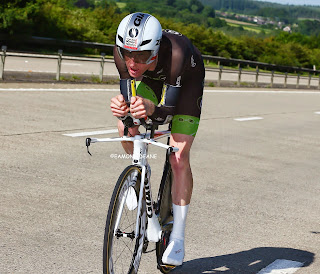 Sir Bradley Wiggins & Alex Dowsett hold no fear for Matt Bottrill as he puts in the final preparations for the National Time Trial Championships in Wales on Thursday 26th June. The 40 kilometre test based around the Celtic Manor resort in Monmouthshire will hold no surprises for the 36 year old Coalville postman, who reconnoitred the course earlier this year. Bottrill won the silver medal behind Dowsett at last year’s championship and has done all he can to go one better this time around. Speaking after successfully defending his 50 mile crown on a rolling circuit in Dorset, his time of 1:40:47 averaging out at over 29mph, Bottrill sounded quietly confident
“I am just overloading on training, it is too close to my target race so I have not eased up for this, the 50 is important but not as important as the British Cycling championships, that is my target for the year, the aim is to win. We have been planning since last October and I have lost weight and have been training in the hills a lot more. Obviously Wiggins is in a different league altogether and Alex (Dowsett) but I have committed to it so much this year; I have to have the belief that I can win it. I have sacrificed so much to be in the best form of my life”.
As well as retaining his “50” title Bottrill has also secured the Circuit Time Trial series, add in his considerable road racing experience and the technical course in Wales may well just suit him. You can also be sure that the more established names will give him the respect he has earn’t. 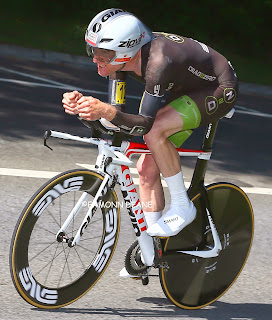 The start list for the time trial championship is full of Continental, as well as home-based professionals but not so many of the BBAR contenders, Is Matt surprised by this?
“I am surprised, I think they should enter it, to be the best you have to take on the best, the atmosphere at the event is great, you just cannot compare it to an ordinary event, on closed roads, it is awesome.”
There will be no celebration beers for Bottrill till after the Championships, real life is calling and that includes the 4 hour drive back home, saying goodnight to daughter Isla,6 and 19 month old twins, Luke & Ava and the 4.30 Monday morning alarm!
“You know what it’s like with a family you go home and it all just starts again”
That family though, is very supportive, wife Kate is the daughter of Coalville Wheelers legend, Geoff Platts and grew up around bikes. Kate takes up the story….
“Matt works incredible hard to try and fit everything in dad, cyclist, husband and the day job. The kids can be hard work at times but worth it, Luke already loves the bike and loves going in the garage with Matt even though he did take a hammer to his new bikes!
I have been with matt for 14 years now and seen him really grow and change his whole cycling career. He did come to a point where he considered leaving it but then he met Simon (Smart) and Bob (Tobin). They gave him the science behind riding his bike and gave him the new incentives he needed, thank god as he would be a nightmare without his bike he’s got too much energy. His granddad meant the world to him; he was an extremely special man, which is where Matt now gets his focus from, to do his granddad proud. I have never known Matt to train and be so dedicated as he is this season he’s really got the "it’s now or never attitude” which gives him that drive, especially when it comes to those days where he is tired or its hammering down with rain he still pushes himself to go out as he doesn't want any regrets or “if only’s” this season”
As for Matt,what’s in the back of his mind? The 100, a 12 hour the BBAR perhaps?
“In the back of my mind i would like to set up my own coaching business at the end of the year, just showing people what they can actually do on limited time. I don’t think people believe what I do, it’s about dedication, I have not got masses of hours to train, and it’s all about being smart. You make the most of limited time. I would also like to go into triathlon, I want to do an Ironman but you won’t see me riding a 12 hour!”
Kate has the last word
“I admire Matts dedication, he is very humble, doesn’t like to brag and will always find time to talk to everyone. I’m extremely proud of him, I probably don’t tell him often enough but to me he is just my Matt, not this amazing cyclist everyone else see’s.” 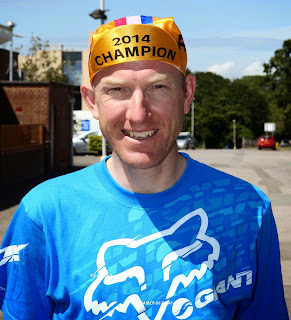