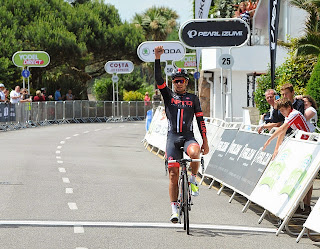 The NFTO Pro Cycling rider launched a last lap attack in the final five kilometres of the Pearl Izumi Jersey International Road Race, part of the Jersey Festival of Cycling, to take victory by 14-seconds from breakaway colleagues Steve Lampier and James McLaughlin, the latter riding for a Channel Islands composite team.

The trio, plus Ian Bibby and Yanto Barker had been at the head of the race since the opening lap, in a move instigated by the latter on the first ascent of St Catherine's Hill, midway around the 14-kilometre loop.

The five worked well together to stay clear of a fractured peloton, with a group of ten riders, eventually led in by Marcin Bialoblocki providing their own real opposition, but one which faded over the final two laps of the Jersey circuit.

With Bibby and Barker tailed off on the penultimate tour, a cramping Lampier and McLaughlin had no answer to Blythe's attack, with the NFTO rider having been to the fore of the break throughout.

Consolation for third placed McLaughlin, who rides for the French Guidon Chalettois team was the day's King of the Mountains prize, for amassing the most points over the St Catherine's Hill climb, which the race tackled on each of its ten laps.

52 starters / 41 finishers
on June 15, 2014
Email ThisBlogThis!Share to TwitterShare to FacebookShare to Pinterest