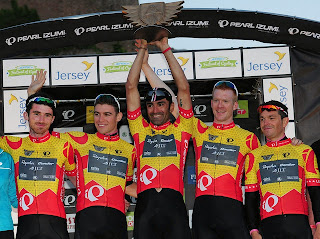 Having led the Series since Round Two in Barrow, Rapha Condor JLT became assured of the title mathematically after the afternoon's hill climb, won by Team Raleigh's French rider Matthieu Boulo.

Such was their advantage, and after winning the afternoon's hill climb, John Herety's team could afford to come third on the night, behind round winners Madison Genesis, and lose Felix English after a lap with a broken wrist sustained in Tuesday's Woking event, and still finish 16-points clear of Madison.

There was on the night glory for Madison Genesis though, taking their second double of the week to follow their Woking success, with Tom Stewart claiming another solo individual win to help them to the night's team prize.

Stewart was part of a ten rider group who worked their way clear early on around Gorey's fast, but technical circuit. Repeated attacks from the leader's failed to stay away, until Stewart's move approaching the hour mark saw him rapidly build a 16-second advantage he would hold to the finish.

As in Woking three nights before, Node4 Velosure's George Harper led the chase, but come the final sprint along Gorey's coast road it was Morgan Kniesky edging Ed Clancy for second spot. Harper claimed fourth before fifth for Alex Paton, after another impressive ride by the Pedal Heaven Colbornes rider, and Guernsey's Tobyn Horton sixth, in what was the closest the Channel Islander gets to a home round. 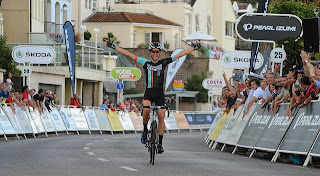 Stewart's win helped Madison Genesis to their fourth team win of the 2014 Pearl Izumi Tour Series, with Node4 Velosure coming second thanks to top 10's from Harper and Rob Partridge.
Rapha Condor JLT took third on the night to finish the Series with six team wins, their best ever haul in a season, while the young Great Britain academy team were celebrating having come out on top of the three-way battle for the wooden spoon, which went, narrowly, to Pedal Heaven Colbornes, in their debut season.

The final Costa Express Fastest Lap of the year went to a Great Britain rider too, with youngster Germain Burton following up on his seventh place in the hill climb with the fastest individual race lap.

There was another Sprint win for Kristian House, but it was Jon Mould winning the green jersey, which he'd taken on the opening night in Stoke-on-Trent, by 17-points.

Earlier in the afternoon Raleigh's Boulo had taken the hill climb win above Gorey Harbour, high enough he joked afterwards that family in France would have seen his victory.

Behind Adam Blythe was runner-up, just over a second behind Boulo, with Harper, Jack Pullar and House all within five seconds of the winner in a closely fought affair.

The cumulative times gave the team win to Rapha Condor JLT ahead of Node4 Velosure and Madison Genesis, with Starley Primal unlucky to finish seventh, having placed both Pullar and long-time leader George Pym in the top nine fastest times.

The team title for Rapha Condor JLT was also momentous on several counts – the squad becomes the first to win the overall prize for a second time, following their success in 2011; John Herety becomes only the second team manager after Keith Lambert to win the title on two occasions; and Ed Clancy becomes the first rider to win the Pearl Izumi Tour Series overall in four years (2009, 2010, 2011 & 2014).

Saturday morning saw the Jersey Festival of Cycling continued on Saturday morning with the Pearl Izumi Tour Ride coastal sportive on Saturday, with just under 400 amateur cyclists taking on either a 50 or 100-kilometre route, starting and finishing from the picturesque location of Gorey Harbour.

Highlights of the final event of the 2014 Pearl Izumi Tour Series will be shown on ITV4 at 7pm on Monday 16 June, with a repeat at 11.50am on Tuesday 17 June, and will be available on the ITV Player for 30-days after broadcast.

on June 15, 2014
Email ThisBlogThis!Share to TwitterShare to FacebookShare to Pinterest