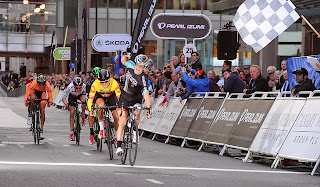 Rapha Condor JLT continued their dominance of the 2014 Pearl Izumi Tour Series with a fifth team win at Canary Wharf on Thursday night, but it was Madison Genesis' Tobyn Horton hitting the headlines for his first individual win.

Horton headed Chris Opie in the final lap dash from an eight rider group around Canary Wharf's 1-kilometre circuit, with the Cornishman taking the evening's Costa Express Fastest Lap on the final tour.

Behind them, Alex Paton took Pedal Heaven Colbornes' best individual result of The Pearl Izumi Tour Series, with third on the road, ahead of Marcin Bialoblocki and James McCallum, the latter on an emotional evening, as his final appearance in the Series ahead of retirement later on in 2014, following the Commonwealth Games in Glasgow.

For Paton third helped Pedal Heaven Colbornes to sixth on the night, and lifted them off bottom in the table to penultimate spot, sandwiched in a three-way tie with Great Britain and Starley Primal Pro Cycling, as the three squads rely on countback to separate them.

At the front no such measures are necessary, with Rapha Condor JLT now 18 points clear, with only 36 more available from Tuesday's Woking event and Jersey's double header final round. The men in black, who have become the men in Pearl Izumi's red and yellow since Round Two at Barrow, took their fifth team win of the 2014 Series, equalling their tally from 2010 and 2011, when John Herety's team also won the overall title.

Behind them come Madison Genesis, who are now just two points ahead of Team Raleigh, although neither team faired particularly well in Canary Wharf, taking fourth, in the case of the latter, and fifth for the former. 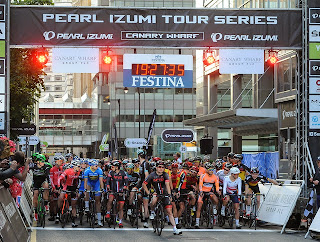 With two riders in the front group of eight – Bialoblocki and George Harper – Node4 Velosure enjoyed their best result of 2014, taking second on the night, while another rider to again feature near the front was Great Britain's Matthew Gibson, who took victory in Peterborough earlier in the Series.

Kristian House won the evening's Sprints prize to move into second spot in the standings, 15 points adrift of NFTO's Jon Mould, who was rested from the Canary Wharf race.

Highlights of the Canary Wharf event are on ITV4 at 10pm on Friday 6th June, with a repeat on Saturday 7th June at 8.35am, and will be available on the ITV Player online for 30 days after broadcast.

Next week sees The Pearl Izumi Tour Series make its annual trip to Woking, with the Surrey town hosting Round Nine on Tuesday 10th June, alongside the final event of the women's Matrix Fitness Grand Prix Series.

Teams will then head to Jersey in the Channel Islands for a double header final round, encompassing a hill climb event and the traditional circuit race on Friday 13 June, as a part of the Jersey Festival of Cycling.

The weekend includes the Pearl Izumi Tour Ride coastal sportive on Saturday 14 June allowing amateur riders to ride the island, before the Pearl Izumi Jersey International Road Race on Sunday 15 June, which will see the professionals back in action for a 140-kilometre, ten lap road race.