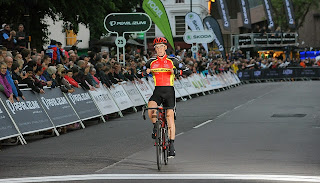 Matthieu Boulo soloed to victory in Redditch to take Team Raleigh's first individual win for the team, but behind him it was a two, three, four for Rapha Condor JLT for a dominant team win.

Madison Genesis in turn are just three points clear of Team Raleigh, who have enjoyed a recent excellent run of form thanks to last week's wins in Durham and Edinburgh, and Boulo's Redditch triumph helping them to second on the night.

Raleigh had been one of the most active teams throughout Redditch's Choose how you move round, with Liam Stones, Yanto Barker and Boulo all enjoying time up the road at the head of the race.

On drying roads around Redditch town centre though it was an ever changing picture at the front, with lap after lap the order changing, with Starley Primal's Jack Pullar and NFTO Pro Cycling's Sam Harrison two to stay away for the longest.

Boulo's effort with two laps to go saw him go clear, putting his head down to maintain his margin to the finish, while behind Pullar's chase ended in a final lap crash, with Rapha Condor JLT trio Felix English, Ed Clancy and House comfortably leading in what remained of the main field.

Stones and Barker's fifth and eighth secured second on the night for Raleigh, in a close battle with Madison Genesis who also placed three riders inside the top ten.

Led by Gruff Lewis' seventh place, Pedal Heaven Colbornes took their best ever Pearl Izumi Tour Series result of fourth on the night, to close up the battle at the bottom of the standings to just three points between them, Starley Primal and Great Britain.

Highlights of the Redditch race are on ITV4 at 9pm on Wednesday 4 June, with a repeat on Thursday 5 June at 9am.

Round Eight of The Pearl Izumi Tour Series takes place in London, at Canary Wharf on Thursday 5 June at 7.30pm, preceded by the Canary Wharf Corporate Grand Prix pro-am at 6.30pm. 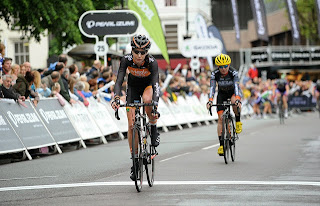 Roberts was in a six rider group set to contest the win, but on roads made greasy by earlier rain, Charline Joiner slid out at the last corner, taking Helen Wyman with her and disrupting the rest of the group, leaving Roberts in front of Lydia Boylan and Dame Sarah Storey. 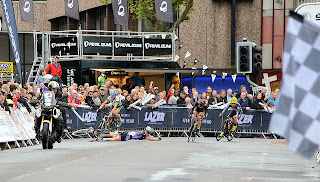 Storey and Joiner had worked hard with teammate Ciara Horne in the front group with Series leader Eileen Roe distanced from the front mid-race in a bid to put Pearl Izumi Sports Tours International rider Joiner into the leaders jersey.

But with the pressure on, Joiner slid out, crossing the line on foot in fifth, and with Roe recovering for twelfth, the Starley Primal Pro Cycling rider kept the jersey by three points.

For Roberts it was a great victory on only her second appearance in the 2014 Matrix Fitness Grand Prix Series, riding unsupported as the only Wiggle Honda rider in the field. Roberts finished just ahead of Series regular Boylan, who recorded her first ever Matrix Fitness GP Series podium in Redditch.

In third, Storey lead in a trio of teammates, first Horne and then Joiner, on foot, just ahead of Wyman who also crossed the line on foot, but consolation was the Sprints win on the night, and with it the Series lead.

The final round of the Matrix Fitness Grand Prix Series takes place in Woking on Tuesday 10 June, with highlights of the Redditch round shown as a part of The Pearl Izumi Tour Series highlights on ITV4 at 9pm on Wednesday 4 June.