Canary Wharf will reverberate to the sound of cycling tomorrow (5 June), as elite professional cycling races back into the world famous business and shopping district just a month before the Tour de France races past on its way to the Stage Three finish on The Mall. 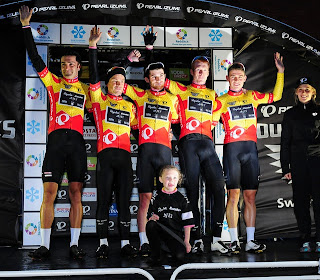 The Pearl Izumi Tour Series, Britain's leading televised cycle race Series, returns to the Canary Wharf Estate for its annual London leg this Thursday, with an hour long race from 7.30pm taking place on the roads around Canada Square.

On one of the fastest circuits on the 10 round Tour, and the only round in London, riders will average approaching 45 kilometres per hour around the 1-kilometre circuit, making for an action packed and spectator friendly race.

Nine squads are racing in the full Pearl Izumi Tour Series, which has a unique focus on the teams, as they battle to place their top three riders as high as possible, and claim the team prize.

Heading into the Canary Wharf Estate round London based Rapha Condor JLT lead the way at the top of the standings, head of Madison Genesis and the famous name of Team Raleigh.

Commenting on the Canary Wharf round Ed Clancy said;

"We're looking forward to the Canary Wharf event as it's the home round of our sponsors Rapha, Condor and JLT. It's a very fast race, and usually ends in a bunch sprint, so it's a great chance for spectators to get a taste of just how fast and exciting professional racing can be.

"The course suits me and the team down to the ground. Canary Wharf also brings back good memories for us of winning the Series overall at the final round in 2011.”

Joining the nine full season teams will also be four guest teams, including the Haribo Beacon team of Olympic Champion Steven Burke and the Bromley and Sevenoaks based Catford CC Equipe Banks team, backed by top high street name in the men's fashion world Jeff Banks, a lifelong member of the Catford CC.

The event kicks off a great summer of cycling in the capital, which includes this weekend's Nocturne, the visit of the Tour de France on Monday 7 July, the Prudential RideLondon weekend on 9th and 10th August and the final stage of The Tour of Britain on Sunday 14th September.

Highlights of the Canary Wharf race will be shown on ITV4 at 10pm on Friday 6 June, with a repeat at 8.35am on Saturday 7 June.
on June 04, 2014
Email ThisBlogThis!Share to TwitterShare to FacebookShare to Pinterest