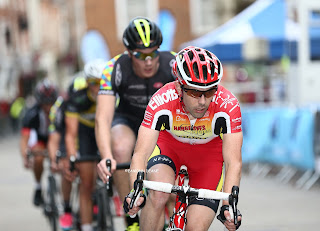 New for this year is the Hargroves Cycles Fastest Lap award. Simply, the fastest male and female riders around the circuit will receive a £50 voucher from headline sponsors Hargroves Cycles.
“We previously had prizes for Prime Sprints” said Event Manager Ruth Crawford. “But it didn’t ever really seem to work, either for the riders or spectators – so we looked for something different.
We used Chip Timing for the first time last year, which was a massive step forward, but there was more we could do with it. This year, we’ll have both live timing available via web for spectators, and for riders to review immediately after the race, which will mean any blips in the results can be spotted quickly, and allow easy tracking of the fastest lap of the day. The data can be monitored by our team of BC Race Officials and also our commentator, Marty MacDonald McCrossan, who we are delighted is back again this year. We’re looking also to have a race clock at the Start/Finish which should add to the experience and simplify matters for all!”
It won’t be a surprise to those there that last year’s female fastest lap was recorded by Pfeiffer Georgi (Liv Cycling Club – Epic Coaching), who won both the U16 race and Women’s race. She put in her fastest lap early on lap 6 to break the women’s field and take a solo victory. Fastest for the men was Calum Croft (Primera-TeamJobs), who finished second in the men’s race smashing his fastest lap on the last lap of the race, only losing out by .035 seconds on the line, after 54 minutes of racing.
2016 Records: Calum Croft: 1:30.333; Pfeiffer Georgi 1:45.884
“We’re really pleased to be sponsoring the Fastest Lap” said Matt Treviss, Head of Marketing at Hargroves Cycles. “We hope it will add a bit of fun to the event, and with the live timing, it will be something that the spectators can track during the races and make Marty’s life easier on the mic. Spectators can see lap by lap just how quickly some of these riders are able to race around the circuit, and when it’s a bit slower and more tactical – and it’s something the riders can look up after they finish.”
on May 25, 2017
Email ThisBlogThis!Share to TwitterShare to FacebookShare to Pinterest