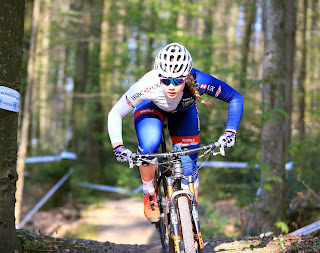 Evie Richards, who finished fourth in the under-23 women’s cross country event at the UCI Mountain Bike World Championships which was held at the same venue last year, will line-up alongside fellow senior academy rider Ella Conolly in the first world cup of the season for the cross country mountain bikers. Current under-23 national champion Frazer Clacherty, who was the second fastest under-23 finisher in the elite men’s race at the Hadleigh Park International on 7 May, completes the line-up.

Lead coach Simon Watts said: “The first round of the cross country world cup series is held at the classic mountain bike venue in Nové Město and all three riders have different objectives for the race.

“Evie will be looking to build on her fourth place finish at the world championships last year and will be targeting a top five finish – something I think she is capable of having finished on the world cup podium twice last year, which marked her first year in the under-23 category.

“Ella is returning to the cross country mountain bike race scene having taken some time away from it, and this world cup represents a development opportunity for her. We’re looking for Ella to focus on her first lap time, rather than the overall result.

“Frazer has taken a big step up this year having had a really good, solid training block over winter. He has been unfortunate so far this season and hasn’t had the results he’s deserved due to mechanical issues, so this world cup gives him the opportunity to demonstrate where he is against a world class under-23 men’s field.

“Overall, the squad has been lifted by their teammates’ superb one-two result which Dan Tullet and Cameron Orr had at the UCI Mountain Bike Junior Series at the Haldeigh Park International last weekend, and we’re hoping to continue this momentum in Nové Město.”