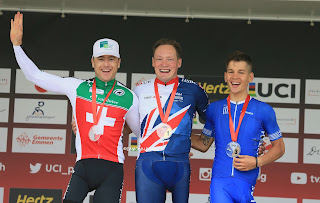 Simon Price ensured there was a golden finish for the Great Britain Cycling Team on the final day of action at the UCI Para-cycling Road World Cup in Emmen.

A bronze medallist in Friday's time trial, Price's impressive victory was his first in a road race since 2013.

Price dealt with the wet weather conditions well and was never far from the front as the race progressed.

With two laps to go it looked like it might be his fellow Great Britain Cycling Team rider, Louis Rolfe who could be standing on the top step of the podium as he launched an attack going ten seconds clear of the field.

However he was reeled in by the bunch on the final lap and it was Price who came through to take a comfortable victory.

Speaking afterwards, Price said: "Well chuffed. I was reminded just last week that it had been four years since I had last won one of the World Cup road races.

"There are so many variables coming into a finish like that. I had a plan, stuck to it, trusted the wheels and tyres and went for it. I committed early and got round the corners and got over the line."
on July 03, 2017
Email ThisBlogThis!Share to TwitterShare to FacebookShare to Pinterest