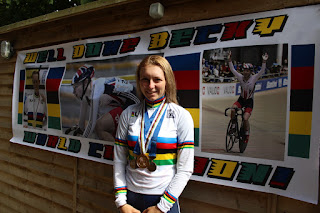 Rebecca Raybould lifted the junior world scratch race title at Aigle in Switzerland. Attacking from the front, the 18 year old former Poole Wheeler held off the field for 11 laps to earn the honour of wearing the rainbow jersey. Weymouth-based Raybould, a former Bournemouth track league rider, has enjoyed a successful few weeks, the world title coming after she had won two bronze medals in the team pursuit and points race in the junior Europeans in Montichiari, Italy. “Local Riders, Local Races” spoke to the new world champion on her return to the UK, thinking she might be able to put her feet up after a hectic time.
LR,LR Now that you are back can you have a rest? Or are you back on the track? what is next?

RB “This week I will have a few days to recover from the long trip and then next week track national’s start in Derby which I will be competing in and hope to get stuck in.”

LR,LR How does it feel to be world champion? Has it sunk in yet?

RB “Not yet, I think that it will be a while until I think of myself being a world champion. It took me a long time after the race to realise I had won a world champs title and I would receive a rainbow jersey and a gold medal and hear the national anthem being played”.

LR,LR We think you are a positive, attacking rider, did you plan the move, had you thought about it the night before or was it a spur of the moment opportunity?

RB “After riding my qualification ride in the morning I knew that there were a lot of fast riders that would be very competitive in a sprint finish, this meant I would have to use different tactics to win. Before the final I had decided on my plan for the race. I was looking for opportunities to get into a break in the first half of the race but none of the attacks made were good enough for a race winning move. My plan was that if the bunch was all still together coming into the final third of the race then I would make committed solo attack to win.”

LR,LR Was there ever a moment of doubt that you had done the right thing? Or were you confident the move would work?

RB “The race worked perfectly to my plan as the right moment for my attack came with 12 laps to go which at the time did feel like quite a long way to the finish and I did have a slight moment where I thought it might be too far to go but I guess that also made the other riders think the same and so they may have felt my attack wouldn’t stay away. I also know that I am confident in making the right attacks during a race so I knew that if I fully committed then the attack would be a good one.” 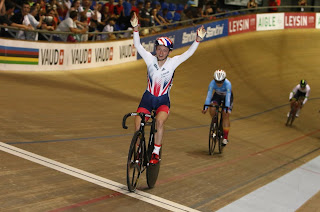 “You also rode the team pursuit, tell us about the incident with japan that saw a couple of riders come down?

RB “In the first round we were against japan and we knew from the qualifiers that we were a lot faster and so we were likely to catch them during the race. As we did make the catch, we made a big effort to get round them as quickly as possible. As we came level with them the lead rider from the Japanese team made a change which caused the crash. A few riders fell, including Lauren (Dolan) from our team and we had to finish with just 3 riders but we had lost a lot of time. We were given the opportunity to ride again shortly after the accident which we did but we were all very tired although we did improve our time.”

LR,LR Is the pursuit a discipline on which you think you can improve?

RB “Yes as a team I think we have already made some big improvements this year and the way we rode as a team was very impressive but there are always things to improve on. For me, when riding a team pursuit I usually find it hard to ride close to the wheel compared to the others, this is something that I need to work on to help improve mine and the team’s performance in the team pursuit.”

LR,LR You have a great team around you, who provide lots of support?

RB “I have had lots of help from so many people since I have started cycling and I would like to thank everyone that has helped me become the rider I am and what I have achieved so far. I have lots of support from British cycling, I have been on the programme for 3 years now and they have given me lots of experience that has helped me to improve my performances and I’d like to thank all the BC staff that have supported and helped me to improve. Family and friends constantly give me full support, also my club Poole wheelers & coach Graham (Hurst) have always been there to help me with anything and have always been very friendly and encouraging. This year I have joined Liv cc but I didn’t get to ride for them as much as I would have liked because I struggled with illness for a lot of the year. I need to say a huge thank you to Mark Dolan at Epic coaching who gave me a huge amount of psychological support though this year leading up to euro’s and worlds.”

LR,LR When can we see that rainbow jersey in Dorset, Bournemouth track maybe?

RB “Pre euros I went over to the track to ride with the young members of Poole wheelers and they were very kind to give me flowers and a card to wish me luck. Since I have been back I have already had requests to go back to the track for everyone to see my rainbow jersey, so I will have to arrange this as soon as I can & hopefully this will be inspiring for all of them riding!” 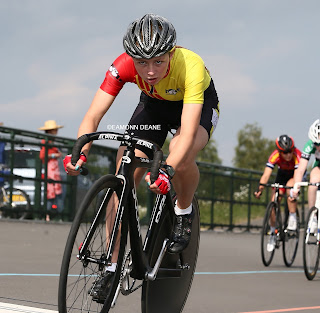 Alex Jolliffe took bronze in the team sprint after finishing 4th in the match sprint at Montichiari. Jolliffe, also from Weymouth placed 9th in the Keirin and 23rd in the Kilo at the first World Junior Championships. 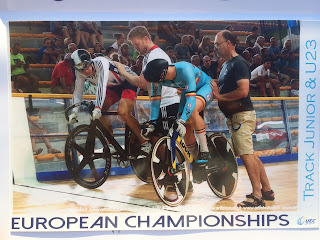 
on July 28, 2016
Email ThisBlogThis!Share to TwitterShare to FacebookShare to Pinterest