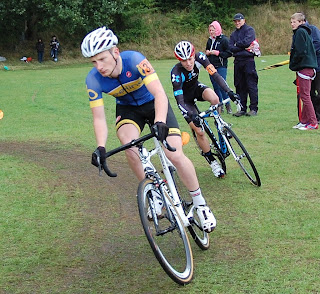 It was second for the second week running for Broadstones U23 Luke Gray in the second round of the Wessex Cyclo-Cross League at the Oxford Spires Academy at Cowley in Oxford on a day that looked domed to be a mud bath, so the weather men said. But for the whole meeting there was only one shower at the end of the Veteran's race, just 15 minutes before the start of the Senior race, and judging by the tyre choice for the senior race some where expecting more rain as the weather man said.
However the Oxonian CC had laid out a challenging course on the school playing fields linked by some technical wooded sections and connected to the upper and lower fields by some very steep banks. The course even dried a little in the wind although some of the grass corners where a little slippery, not surprising after 49 riders in the U12 race and one of them was 3rd place local lad Rowan Turner (Poole Wheelers) who put in a brilliant ride from a large entry. Also 29 riders in the youth race, not to mention the 87 in Vets, Women and Junior race and all had lap the course many times over. So the course was well run in for the main race of the day containing 50 Senior riders.

The start of the senior race was a fast affair with Ben Sumner (Beeline Cycles) taking off at the head of the race at a very rapid pace closely followed by Luke Gray (Trek Cyclo-Cross Collective), and within less than a minute the U23 pair had gapped the rest of the field headed by Mike Cotty (wheelbase Cannondale) and Crispin Doyle (Hargroves). Doyle who for the second week running had opted to race the senior race after yet again winning the Vets race.
On the first accent of the step bank next to the pits it was Ben in the lead and first to quickly run the up the bank. Once over the top and back on his bike, he took a quick glance over his shoulder and was surprised to see Luke on his bike almost touching his rear wheel. Luke made quick work of the bank staying on his bike and was one of the few riders able to ride the bank and the only one to ride it every lap. Behind the leading pair Mike Cotty and Crispin had started to pull away from the main field leaving Matt Woods (Hargroves) heading the main charge.

Somewhere round the second lap and after repeated attacks Sumner managed to gain a small gap on Gray, while the chasers had also split leaving Doyle on his own ahead of Cotty. Halfway into the race Ben had a 30 second lead on Gray with only a dozen seconds back to Doyle, Cotty was now a long way back. In the meantime Cotty's brother James (Cannondale Racing) was running to the pits for a bike change with a rolled tub on his back wheel.

In the last two laps Gray slipped off on a tight slippery grass bend trying to over take a backmarker loosing some time to Sumner, but was now quite ahead of chaser Doyle. Come the last lap Sumner blasted in to take the win from Gray by just over a minute, who in turn was nearly a minute in front of the last podium position man Doyle, where the top 3 riders all chose to use dry tyres which proved to be a wise choice in the end. 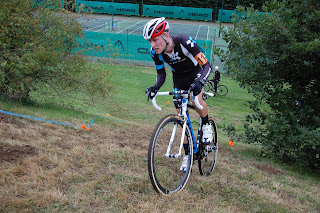 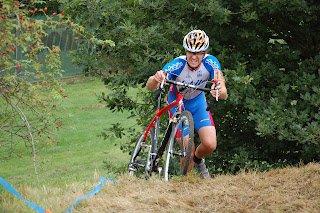 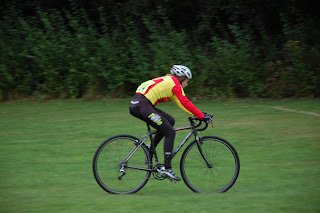 on September 16, 2013
Email ThisBlogThis!Share to TwitterShare to FacebookShare to Pinterest