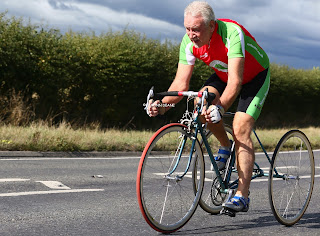 Rain hits Sunday racing
The rain may have stayed away from the Crabwood event but led to the cancellation of the Poole Wheelers’ 25 at Upton the following morning.
Meanwhile at Ringwood, New Forest CC’s damp club 10 attracted only nine starters with the club’s Stuart Peckham coming out top with 24-59.
Bournemouth Arrow CC’s Peter Wilson was next with 25-56 from New Forest’s Graham Lenton (26-16).
Others (NFCC unless stated): Phil Underwood 27-19, Mark Jefferies 27-21, Paul Shields 28-09, Phil Jones 29-03, Mark Woodgate (Come and Try It) 29-17, Peter Hawker 31-30.
Wind in Wales
New Forest CC’s Bob Jolliffe clocked 27-55 in the dry, but windblown Velo Club Melyd 10 in North Wales on Sunday. Winner was Fibrax-Wrexham Road Club’s David Crawley with 20-15.

on September 09, 2013
Email ThisBlogThis!Share to TwitterShare to FacebookShare to Pinterest