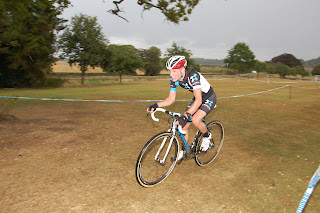 Sunday was the first round of the Wessex Cyclo-Cross League held in the school grounds of Mary Hare School near Newbury. Luke Gray gets his cyclo-Cross season underway………..

Most of the course was centred on the flattish playing fields with nice short grass. But once the course went around the back of the school it got a whole lot more interesting with some off cambered banked turns, loose gravel, a steep uphill with a fast decent, a nice set of humps leading on to tarmac. It even went through a small cover entrance way and up a couple of steps.

The senior race started at 2:00pm in the sun, but the weather men had forecast rain or at best a shower or two. I was hoping for a dry race, as my new Trek Cyclo-Cross Collective team bikes have only just arrived at the Trek race shop in America along with the new kit.
Anyway the race started with Ben Sumner (Beeline Cycles) taking the lead from the gun with me in tow. There was no stopping Ben who was on a mission, and within a couple of hundred metres we were on our own out in front of a chasing group headed by Crispin Doyle. Halfway round the second lap I decided to dropped back being the first race of the season and unsure how long Ben could keep the pace up. Ben continued at a charging pace and was clearly in good form. I dropped back for a couple of laps then the gap settled around the 40 second mark for most of the race.
It was mid way through the race the first shower appeared which started slowly but got steadily worst. Then no sooner had the shower gone another came alone, this time things where starting to get quite wet. My pit crew said Ben was calling the pits to prepare for a bike change with reduced tyre pressures as he had started to slip about no doubt, but in the end the rain dried up so he stayed out. I was fine and the only slips I had were both front wheel slides in the dry, one on the grass and one on the tarmac turn. Once the rain had gone it was only a couple of laps to go and I had started to eat into Bens lead and the gap back to Crispin was also going out. But the gap was to big for me to catch the hard charging Ben who took the win with me closing the gap to 24 seconds on the line for second place with Crispin coming in 2 minutes 39 behind for a well earn third after his win in the Veteran's race earlier in the day.
I have a few cross races to prepare myself and my new bikes before I return to Oudenarrde, in Belgium where I will once again be racing cross over the winter.

on September 09, 2013
Email ThisBlogThis!Share to TwitterShare to FacebookShare to Pinterest