Jude Martin (Poole Wheelers), whose parents received loving care in Poole’s Forest Holme Hospice, is to take part in a triathlon to raise funds for the charity. 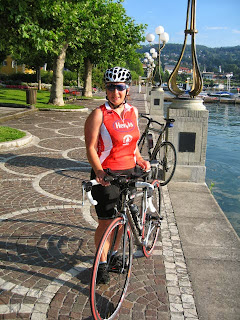 Both of Jude Martin’s parents died of cancer within weeks of diagnosis.
She will attempt the 400 mile challenge on 27th-29th September.

The Lands End - London - Dover Triathlon (LLD Triathlon) will see a group of selected athletes cycle 336 miles from the UK's most south western point into London. Once the athletes arrive in London they then have to swim 7.3 miles followed by an 87 mile run down to Dover. The gruelling event will cover a total of over 400 miles
Jude tells her story.
“My dearest Dad, Alan, was diagnosed with cancer in 2007 and it had spread to several places which meant it was terminal. He fought, but the illness stole him from us in just eleven weeks at just 63 years old.
“It was so terribly hard especially for Mum, Beverley. After 43 years of marriage how do you pick up the pieces, but she did and I am so proud of her for taking small steps one at a time to re-build her life, surrounding herself with lovely people from the Forest Holme. They helped to rebuild her life, providing such a vital life line.

“In June 2012 we celebrated Mum’s 65 birthday. The celebrations were short lived as she was diagnosed with cancer of the oesophagus which had spread to other places - how could life deal us yet another cruel card and so soon. Mum bravely fought the illness, but again this monster of a disease took her away after just four weeks.

“Beverley was ‘as brave as a lion’ and I take my inspiration from my beautiful, kind, caring, precious Mum. I hold the Forest Holme so very dear to my heart not just for taking care of the two most precious people in my life when they needed to feel cared for and safe, but because of the consistent, unconditional care they quietly provide to those who need it.”
If you would like to support Jude, visit her Just Giving Page
on September 23, 2013
Email ThisBlogThis!Share to TwitterShare to FacebookShare to Pinterest