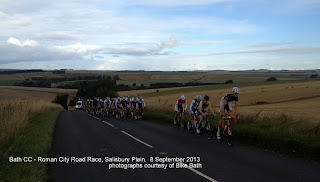 The second edition of this event at Chitterne,Wiltshire witnesed a clean sweep for Sean Frost of Yeovil CC who completed the 74km in 1h 54min and 26 seconds. The wind and cool temperatures did not effect Frost who attacked on lap one and soon dropped his breakaway companions to claim both the Gladiator and Centurion primes and the Decimator Prize for most aggressive rider. His lead of 1min 30 seconds was whittled down by the bunch to just 15 seconds at the line led by Jon Gates of RAF CC. The Old Guard Vets and Junior prizes were won by Stacey Bray and Tom Jones respectively. 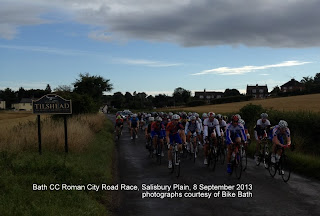 links to photos and videos,


on September 08, 2013
Email ThisBlogThis!Share to TwitterShare to FacebookShare to Pinterest