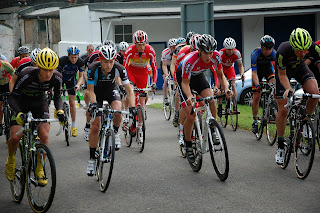 Rob Gray Writes………Round 4 of the Wessex League Senior race won by Steve James (Hargroves RT), where this weeks cross was a local affair at Admiralty Park on Holton Heath near Wareham. Ten years has past since the last Wessex League race on a wet and windy day took place on the MOD land at Admiralty Park. Sunday however was rain free with warm sunny weather on a course with plenty of heavy going grass, woods and a nice tarmac section to stretch the legs.

It was a quick get-away from the start grid where the Seniors jostled for position on the tarmac before diving into the woods for the first lap of the senior race. Once out onto the grass a lead group of Mike Cotty (Wheelbase Cannondale), Luke Gray (Trek Cyclo-Cross Collective),
Steve James and Andy Hargroves (Hargroves RT) had formed. On the second lap Hargroves had dropped off the group which was now headed by Gray as they entered the grass field were the riders jockied for position . A lap later Cotty had taken the lead with Gray who had now broken free from James who had dropped a chain in the woods on a bumpy part of the course. It wasn't long before the group was back to three again. Then Gray was the next to be dropped unable to respond to a quick acceleration. Cotty and James continued to lap this short course together until 2 laps from the end. First Cotty made a move, which came to nothing, then as the last lap approached James made his move and got clear leading all the way to the finish. Cotty came in 10 seconds down followed by Gray 1.45 further back.
After 4 rounds Gray now leads the Wessex Series.

The promoting club Poole wheelers had a good turn out from the youth riders, where for the second week running Rowan Turner(Poole Wheelers) took the win in the under 12 race followed in by Max Meadwell (Bournemouth Jubilee). 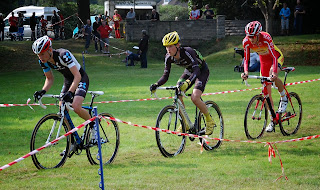 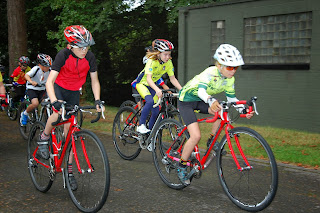 on September 29, 2013
Email ThisBlogThis!Share to TwitterShare to FacebookShare to Pinterest