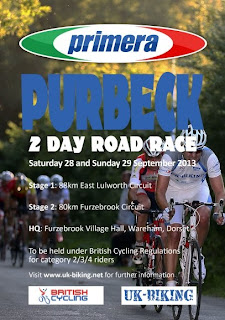 Danny Axford looks to be the favourite for the Primera Purbeck 2 Day race in Dorset. The two stage race over the weekend, 28/29th September has attracted a full field of 80 riders. Riding for Artic Sram RT, the former elite category rider, Axford, has a wealth of experience and is a strong climber , so the Puebeck hills will suit his style. A strong, 3-man Felt-Colbornes-Hargroves team of Colton Jarisch, Robert Ward & John Heaton-Arnstrong will have numerical advantage and will be a serious threat to Axfords ambitions. The Team Tor 2000 quartet led by Charles Rees will also mount a challenge, Rees finished 11th in the "Local Riders,Local Races" sponsored event back in June. Roman City road race winner, Sean Frost is in good form and should feature in the final G C.Others more than capable of a top ten finish include, Sam Gardner (Cannondale RT),Rob Yeatman (Dream Cycling),Tony Kiss (Dynamic Bicycles uk/rpc),Wayne Coombs (Winchcombe CC)& Alexander Royle (Banjo Cycles). Local hopes lie with Calum Croft (Mud,Sweat'Gears, James Horton (Cannondale RT)& joint race promoter, Steve Dring (Team echelon-Rotor) Saturdays opening stage on the East Lulworth circuit, gets underway at 14:00 hrs and includes 6 climbs of Newtown Hill, with time bonuses availlable on each lap, it promises to be an attacking race. Race headquarters on both days is Furzebrook village hall,Dorset BH20 5AR. 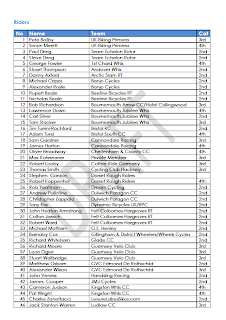 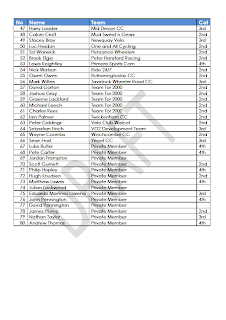 It will be a busy weekend of bike racing in Dorset, as well as the Primera Purbeck 2 day there is the New Forest CC 10 mile tt on Sat and the Poole Wheelers Wessex league cyclo-cross on Sunday. Also on Sunday is the first round of the Off Camber XC mtb series at Blandford.
on September 09, 2013
Email ThisBlogThis!Share to TwitterShare to FacebookShare to Pinterest