Sir Bradley Wiggins swept to victory in Knowsley, heading a Sky Pro Cycling 1-2 in The Tour of Britain's individual time trial on Stage Three, moving him into the race's overall lead.

The 2012 Tour de France winner now has a 37 second lead over Stannard, with IAM Cycling's Martin Elmiger a further 10 seconds back.

"I've made no secret that I really want to do well in this race,” said Sir Bradley Wiggins. "I had to win today, whatever. The conditions weren't ideal for me, but I thought I'd rather end up in hospital today than be beaten, so it was 100% commitment.

"I didn't flinch on the roundabouts in the wet, and fortunately the hospitals are close to where I live, so my wife could have visited me. I knew that...I was prepared to end up in hospital than lose the race today. It went perfect.”

Wiggins overturned an overnight deficit of 30 seconds to previous IG Gold jersey Gerald Ciolek, with the former leader dropping to ninth overall having come in 34th. 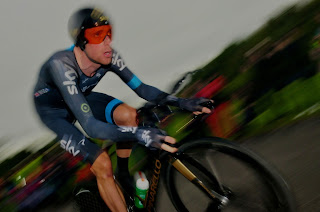 "We're in a great position”, continued Wiggins. "Yesterday I was quite worried about Gerald Ciolek, because if he takes time bonuses every day, Edvald Boasson Hagen won this race like that. He's [Ciolek] a good climber, and I thought it would be difficult, but I've taken a nice chunk of time out of him today, and hopefully that's enough.”

With the weather conditions steadily improving over Merseyside the roads got progressively drier for the later starters, although Wiggins was the only man to dip below the 20-minute mark.

One of the standout performers in Monday's stage Sam Bennett had been the early pace setter, taking over from Anthony Delaplace at the top of the time sheets. Britain's Owain Doull then topped him before 2013 Giro d'Italia King of the Mountains Stefano Pirazzi went quicker.

Garmin Sharp's Bauer then led the way until the Sky duo of Stannard and then Wiggins went quicker. Speaking on the prospects of defending the IG Gold Jersey all the way to London, with tough stages in Wales and a summit finish in Devon still to come, Wiggins said;

"It's always going to be difficult. I don't expect it to be easy. There are time bonuses at the end of each day, but we've got a strong team. We took responsibility from the start, and we're here to win.

"I've wanted to win this race for a few years, and having done the Tour and the Vuelta for the past few years, I've never had the opportunity to do it. I was in no condition last year to ride the race after the Tour and Olympics. At this time of the year it's nice to be in great shape to compete well in this race. Every year this race gets more prestigious, gets the more kudos.” 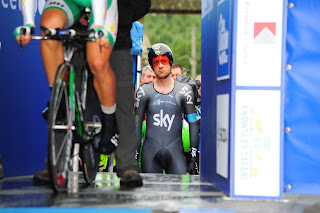 Incumbent leader Ciolek maintained his grip on the Chain Reaction Cycles Points Jersey, while with no points on offer during the time trial Nicola Boem retained the Yodel Direct Sprints Jersey, backed by parcel delivery company Yodel, and Angel Madrazo the SKODA King of the Mountains jersey.

Simon Yates stays the top Under-23 rider, with his lead over Jacob Rathe growing to in excess of 40 seconds, with Great Britain teammate Alistair Slater the only other rider within a minute.

Thanks to the performances of Wiggins and Stannard, with ENECO Tour stage winner David Lopez also in the top six, Sky Pro Cycling take the lead in the team standings.

Highlights of Stage Three are on ITV4 at 19:00, with live coverage of Stage Four on ITV4 and British Eurosport from 14:00 on Wednesday 18 September. Full Results HERE
Stage Four sees The Tour of Britain make its first visit to North Wales in the race's ten year history. Llanberis in Snowdonia hosts the finish of the 188.4 kilometre stage, which includes the final categorised SKODA King of the Mountains climb within the final ten kilometres of racing.

The stage gets underway from the Potteries Museum & Art Gallery in the centre of Stoke-on-Trent at 10:45.
on September 17, 2013
Email ThisBlogThis!Share to TwitterShare to FacebookShare to Pinterest