Gerald Ciolek wins in Kendal to move into race lead 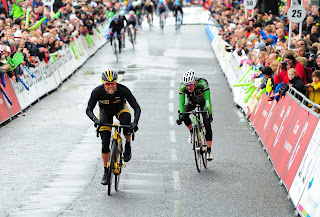 Images Courtesy of SweetSpot/Tour of Britain

MTN Qhubeka's Gerald Ciolek took victory in The Tour of Britain's Cumbria, the Lake District Stage in Kendal to move into a 20 second lead in the race. The German mastered horrendous weather conditions and a testing route to best Sam Bennett in the final sprint up the steep gradients of Beast Banks in the South Lakeland town, taking victory in Stage Two.

"It was a hard day, rain all day so tough conditions. There were some hard climbs today and then the hilly finish,” said Ciolek, who turns 27 on Thursday.

"The guys did a lead out from the bottom and I got in a good position. I had a problem in the last right turn, I slipped a little bit and had a little gap, but in the end it was possible for me to close it.

"In the last 100 metres I just put on the big ring and started my sprint and from that point on I was really confident to take victory.”

Ciolek was part of a front group led into Kendal by solo leader IAM's Thomas Lovkvist, but a lead out from the AN Post Chain Reaction squad launched Sam Bennett up the final climb of Beast Banks, with Ciolek bridging across to pip the Irishman on the closing straight.

Behind Lovkvist did enough to finish third, ahead of Simon Yates, who moves into second overall, on the same time as Pole Michal Golas, and is the leading Under-23 rider. 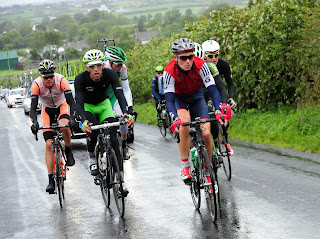 An early break led for much of the stage, helping Bardiani Valvole CSF Inox's into the Yodel Direct Sprints Jersey and Angel Madrazo into the SKODA King of the Mountains jersey. It was the Movistar rider's teammate who earned the biggest cheer of the day, following an attack by Garmin Sharp's Dan Martin on the climb of Honister Pass, with the duo riding through the crowds braving the very worst of Lakeland weather to ride clear.

Sweeping us the breakaway, Martin and Quintana were joined by Madrazo with the trio passing through a crowded Keswick out front. Such was the danger a Sky led peloton brought them back following the day's final categorised climb, only to prompt a flurry of further attacks from Garmin Sharp and Movistar.

Lovkvist though was the only rider to edge away, despite a valiant effort near Crook by Mark Cavendish, with the Swede racing through Kendal with the slenderest of advantages, but to no avail, with the IAM rider slowing agonisingly on the final climb.

Victory for Ciolek comes in the same season that he took the honours at Milan San Remo in dreadful weather conditions, but it's not something that the Cologne native is keen to become known for.

"I'm a bit scared that people will say in the future that I win always when it's raining, but you have to be good in those conditions. It's not that I really like rain and poor conditions, nobody likes to ride in this weather, but it looks like I'm always good when it is tough conditions.”

The German also praised the crowds which turned out throughout the 186.6 kilometre stage, the first Tour of Britain stage to be held entirely within Cumbria in the race's ten year history.

"It is great to see the people coming out in these tough conditions. We had to ride but they could have stayed at home and don't need to come out and watch us, so it was great that people want to come out and see us.”

The German also holds the lead in the Chain Reaction Cycles Points Jersey, eight points ahead of Bardiani Valvole CSF Inox's Marco Coledan, with Stage One winner Elia Viviani third.
Stage Three sees The Tour of Britain celebrate its tenth anniversary with a ten mile individual time trial starting and finishing in Knowsley Safari Park. The first rider is due off at 12:01 with live television coverage will be shown on ITV4 and British Eurosport from 12:30, with highlights on ITV4 at 19:00.

For full results please visit The Tour of Britain results page, here.
on September 16, 2013
Email ThisBlogThis!Share to TwitterShare to FacebookShare to Pinterest