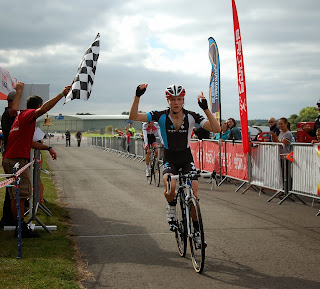 Luke Gray (Trek Cyclo-Cross Collective) took a well deserved win at the 3rd round of the Wessex Cyclo-Cross League in the grounds of the Cotswolds Airport at Cirencester. Rob Gray Reports………. The promoting club Cotswold Veldrijden had designed a fast twisting course on flat ground which weaved its way in and out of some interesting woods sections including a short bank. There where plenty of Belgium style tight bends and a set of planks to keep the riders on their toes. 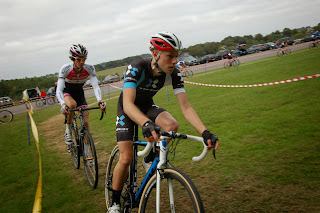 Gray took off at the start with Ben Sumner (Beeline RT) and Scott Chalmers (Dream Cycling), leaving the field chasing them. Nearing the end of the first lap Ben caught a bank hard and rolled a tub, with only a short run to the pit Sumner changed bike loosing 15 seconds on the lead riders and a couple of places. A lap later and the gap from leaders Gray and Chalmers back to chaser Crispin Doyle (Hargroves RT) was only 5seconds with Sumner now in 4th at under 10 seconds. As the race continued Gray and Chalmers steadily stretched the lead out and Gray was happy to get Chalmers on the front to take a share of the work as the pair circulated together.

By the closing stages of the race, Doyle who had won the Vets race early, was now at 30 seconds with Sumner around the minute mark. Coming into the last lap Gray lead Chalmers, but neither rider had made a move to drop the other so all eyes were tracking them in out of the woods. Gray however had put himself in the position he wanted to be in, and as the lap went on it became clear that passing Gray was now going to be hard as time was running out for Chalmers. Then on the penultimate turn Chalmers made a dive on the inside of Gray, and for a second they where side by side rubbing shoulders around the turn and it looked like the pair were going to hit the deck." Gray said " I was forced to take a little more corner speed and felt my tyres sliding out just to stay with Scott.They both made the bend but it was Gray who held the inside line as they sprinted for the final bend. This time Gray kept Chalmers on his out side as they entered the bend, this time Gray pulled out of the bend first and easily out sprinted Chalmers to take the win.

In the under 12s it was Rowan Turner (Poole Wheelers) who took the win from one of the talented Wadsworth sisters Anna. 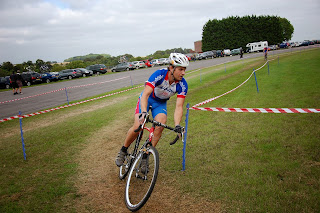 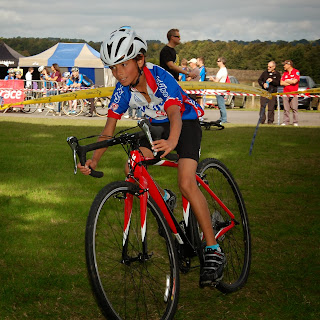 Photos Rob Gray
on September 24, 2013
Email ThisBlogThis!Share to TwitterShare to FacebookShare to Pinterest