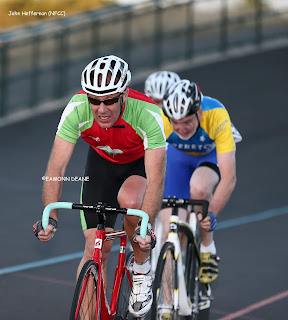 NEW Forest Cycling Club track ace John Heffernan followed up a great eighth place in the European Masters Championships on the Newport Velodrome with a deserved win in his club’s hillclimbs near Fordingbridge.Writes Bob Jolliffe......
Heffernan, who bet Hungarian Sandor Szilagyi in the heats of the 50 to 55-year olds’ 2,000-metre pursuit in South Wales by more than two seconds, had a 1.42sec lead over last year’s club anti-gravity champ, junior Hugo Walters in the hillclimbs.
Setting off first man in both sprints up Buddles Hill and then Ogdens Hill, Heffernan clocked a provisional aggregate time of 2min 17.42sec against young Walters’ 2-18.84.
Third place went to Graham Lenton with 2-29.82 while Mark Jefferies was pleased to claim fourth with 2-38.18.
Others (all NFCC): Stuart Peckham 2-41.91, Archie Holgate 2-51.16, Patrick Walters 2-55.97, Will Taylor 3-05.77, James Wadsworth 3-12.92, Peter Holgate 3-16.53, Martin Balk 4-17.21. Ryan Seed suffered a mechanical problem and clocked 36.35sec for the shorter, steeper, Ogdens climb.
On the 250-metre Newport Velodrome the previous weekend, Heffernan clocked 2-35.170 in the heat against Szilagyi’s 2-37.413 for eighth place.
“He was well up on me over the first few laps but by the bell I had pegged him back to neck-and-neck and in the last lap I took out a two second lead,” said Heffernan.
“Only the fastest four qualify for the ride off for the medals.
“The pursuit is a much more technical event than it seems.
“You have to go full gas for the first half lap to get up to speed, then it is a matter of managing the lactic in the legs for the next 7.5 laps whilst holding a good line around the bottom of the track.
“I still have a lot to learn about this event and I hope I can get closer to the medals in the future.”
He has quite a lot of work to do: Gold went to Frenchman Pascal Montier who qualified in 2-20.385 and then clocked an even faster 2-19.501 to beat Brit Peter Ettles in the final. Ettles’ times were 2-24.12 in the heat and 2-24.660 in the final.
Newbury RC’s Ian Greenstreet, who qualified with 2-25.842, took bronze against fellow GB rider Stephen Clayton who was seven seconds in arrears.

on September 15, 2013
Email ThisBlogThis!Share to TwitterShare to FacebookShare to Pinterest