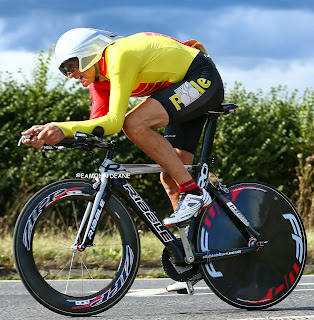 SUPER-veteran Terry Icke was the fastest of three Poole Wheelers’ riders in the Yeovil Cycling Club 10 at Podimore on Saturday afternoon writes Bob Jolliffe.......
The 68-year-old took advantage of good conditions on the road to Tintinhull and back to record a rapid 21-12 while his teammates Darren Lewis and Pete Cotty clocked 22-02 and 26-22 respectively.
Sotonia CC’s Stuart Martingale finished with a fine 21-36. His clubmate Colin Crocker got within just 10 seconds of his best for the past three years with 24-45 and another Sotonia veteran, Chris Summers clocked 27-27.
East Boldre rider Dave England (Crabwood CC) did well to pass the time keeper with 23-40 on the clock after a winter beset by injuries sustained in a training crash.
New Forest CC’s Chris Jolliffe recorded 27-38, his second best of a short season.
The event was won by Rob Pears, Bath CC with 19-50, second was Jon Wynn (Northover Vets) with 20-03 and Andrew Perkins of Mid Devon Road Club took third with 20-08.

on September 22, 2013
Email ThisBlogThis!Share to TwitterShare to FacebookShare to Pinterest