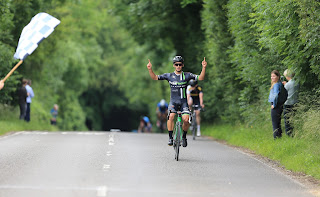 Riding with the assured confidence that only good condition can provide, Will harper won the South Region title on the attritional, 13 mile Stockbridge Down circuit in Hampshire. Harper was in all the moves that mattered and had the legs when it mattered most, distancing the in-form Benjamin Marks (Cycleworks.co.uk) in the final on Winton Hill. Marks deserve credit for an attacking ride and taking the race to Harper in the last few miles. Paul Double (VC Venta) took the bronze medal and picked up the £50 “Local Riders, Local Races” sponsored combativity prize, Double, like Marks, wants to race and was active throughout the 78 mile VC Venta promoted championship. 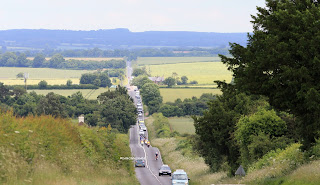 Phillip Peters ( HostA©TAAP Storck), Daniel Halksworth (Velosport Jersey) & Jamie Caldwell (Richardsons Trek RT) gained a small gap on the first lap of 6 pulling away into the wind on the A30 but were soon reeled in. 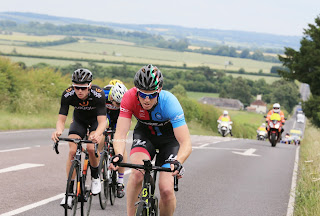 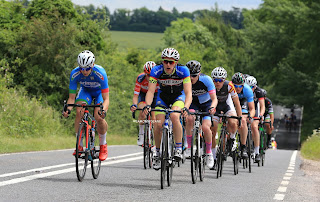 A 13 strong group, containing all the main protagonists, formed after 30 miles, effectively ending the race for those that missed the move. Harper, Marks, Double, Shackel, Peters, Phillips,Jason White (Ride 24/7), Harry Veale (Cycleworks.co.uk), Matthew Osborn & Jack English(Morgan Sharpe PB Adventure Cycles), Oscar Hutchings (PrimeraTeamjobs), Liam Walsh (VC Equipe Flix) and Matthew Woods (Performance Cycles) worked together stretching their lead to over 3 minutes. Walsh had hit the deck early on with several others after a touch of wheels and did well to chase back on. The team work stopped with 1 lap remaining with attacks coming thick and fast, predominantly from those that did not fancy their chances on the uphill finish, James Phillips tried time and again into the headwind but all could smell the finish and nobody was going anywhere. It was Marks who dug deep on Winton Hill, Harper dug just as deep to get on and the rest were out of it, in truth the brave Cycleworks rider was spent as Harper came round to take the Southern Crown, a worthy champion. 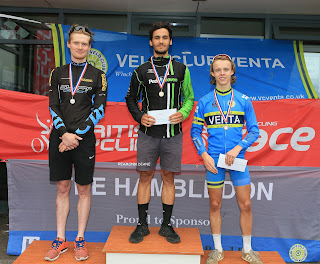 Rider Reaction
WILL HARPER
“That was a really hard race, once we had established the break we all worked well together, Paul (Double) went hard over the top of the climb and whoever was strongest went with it. We worked well but with two laps to go everyone started messing around, missing turns, there were a few tired legs in there. The last lap it was just attack after attack, i think a few did not want to take me to the finish, there was a lot of attacking, I was having to go with every move. Ben did a huge attack on the hill, I just got on his wheel and managed to outsprint him at the end, if he gone again that would have been me done, one more attack and I was gone, that was my last bit of energy. I am really, really happy with that, it was a hard decision with whether to go up and ride the national champs or ride Stockbridge, I love the course and its very local for me. Really happy and happt that it was a hard race”

Benjamin Marks
“The break had all the good guys in it, it was not really moving super quick, I thought we might get pulled back but I don’t think were enough good riders left to chase. Will (Harper) was working hard shutting down breaks, it was hard, I’ll settle for silver”

Paul Double
“I felt awful at the start, I was cramping but it was ok , we wound it up over the top of the climb, we got a good gap, Andy Shackel was getting us working. Ben (Marks) wound it up in the final and only Will could hold his wheel, it all split, it was good, really good”

Liam Walsh
“it was a hard race, I crashed early on, we had to chase back on a for few kilometres, it was pretty grim. it’s a bit disappointing but that’s bike racing , It was the race winning move and it was not that hard, with thirteen riders there, the pace was high but the work rate is low. Will & Ben got away I got round Oscar but could not get to them”


James Phillips
“I gave it might best shot, I knew I could not beat the lighter guys up the climb, they are 20kgs less than me, my time to go was on the flat, into the headwind, I gave it about five or six digs but I got chased down. It’s a tough course, I knew soon as we had the gap it was game over

Oscar Hutchings
“Paul Double really drilled it and split the race, everyone was going out the back, it was a really good group. I just did not have the kick right at the end, I was hoping for a bit more but I was cramping up”


on June 26, 2016
Email ThisBlogThis!Share to TwitterShare to FacebookShare to Pinterest