The Mount Pleasant Park & Ride in Weymouth played host to this year’s edition of the Mud, Sweat n Gears Criterium. The last time this location was used for a cycling event was back in 2017 when there was three races in a small series. Following calls from cyclists from all over the region the club resurrected the British Cycling crit for a one-off race that proved to be a highly valued race.
On the day racing started with a 35 minute cat 3/4 race, followed by a 40 minute cat 2/3 race. The race provided a great opportunity to compete on a short and technical circuit that was closed to traffic. An added attraction with this race was that category three riders had the opportunity to race twice and gain valuable points. 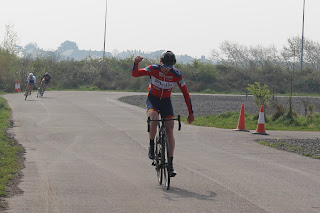 Cat 3/4 race
The race properly on after a few laps when Travis Bramley of BCR Racing went off the front of the 30 man field. Showing strength Travis forged a break away with Mud Sweat n Gears rider Darren Orchard. A short while later Primera-TeamJobs Matthew Norris and Samuel Wadsley bridged the gap along with William Bunday of the Royal Air Force CA. Working together the group managed build a lead out front. Meanwhile the field fragmented further with another group forming while the main pack seemed to be slowly spitting the less prepared riders out. The front group kept on improving their lead throughout the race and eventually lapped most of the field. The final lap saw the five riders out front battle for the points with eventual race winner Travis Bramley riding away with the win. 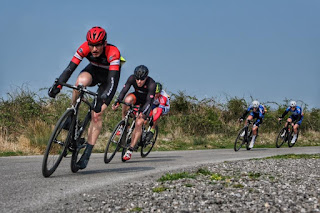 Cat 2/3 race
This race saw some of the riders from the first race line up once more to battle against the strength of the cat 2 riders who were here to do business. Groups formed and then got caught, the pace changed to help chase down groups and riders had to work hard together to keep their chances of points a reality. A break finally came when Adam Toole, the winner of stage 3 at the Sandisons 2 Day last week, rode solo off the front. There was nothing the chasing group could do to catch Toole - who showed a masterclass in how to race. First place was now all but out the window for anybody else to contest as the lead grew to ½ a lap, but the remaining places were still battled out by some real quality riders and ensured the race finished strong. Most notably the cat 3 rider Travis Bramley who won the first race added yet another top three place to his name for the day in a hotly contested sprint.
Thanks to Darren Orchard 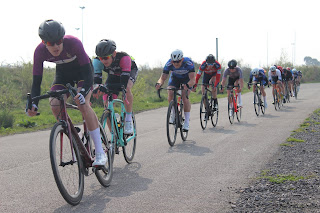 
Mud, Sweat n Gears would like to thank the riders who took part and supported this event. As ever the brilliant reviews from the riders and spectators gave the organisers much to think in terms of planning more events at the site. Special thanks goes to Dorset Council for assisting with the use of the park and ride itself, CC Weymouth for the loan of the race numbers, British Cycling officials for working on Mother’s day, and all associated volunteers for doing the same and giving up their time to help the club put on this very succesful promotion
on April 01, 2019
Email ThisBlogThis!Share to TwitterShare to FacebookShare to Pinterest