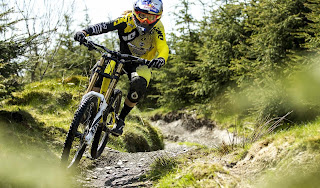 Four-time world champion Rachel Atherton was crowned as the Laureus Action Sportsperson of the Year 2017 at the ceremony in Monaco this evening.

Atherton won every round of the UCI Downhill World Cup series in 2016, topping the season off by winning the world champion title for the fourth time. British Cycling’s president Bob Howden paid tribute to Atherton’s achievements: “In what has been yet another remarkable year for Rachel, it’s fitting that she has been awarded the Laureus Action Sportsperson of the Year award. Her unprecedented results on the bike have made Rachel a true inspiration to many and her achievements are greatly valued by British Cycling.”
on February 14, 2017
Email ThisBlogThis!Share to TwitterShare to FacebookShare to Pinterest