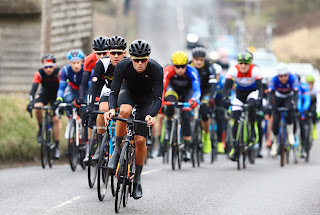 Mick Waite has saluted everyone who got behind Sunday’s Perfs Pedal – from his own support team to those in the wider cycling community writes Rob Atkins.......
The organiser of Sunday’s National B race, which was won by BIKE Channel Canyon’s Chris Opie, revelled in the rides of emerging junior talents Jacob Vaughan, who was runner-up, Louis Rose-Davies and Fred Wright.And after such a successful day, the VC St Raphael man is already looking forward to doing it all again next February. 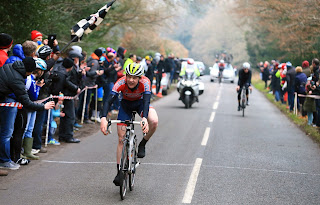 Emerging talent Jacob Vaughan crosses the line in 2nd
Waite said: ‘I’m really pleased with how it went. The level of rider and the interest we have had this year has been fantastic. We have got a few things we want to sort out, like parking and things like that but overall it went really, really well.
‘You can’t organise these things on your own, you would just want to throw it all up in the air. But the team I have around me are fantastic and they were brilliant again on Sunday. 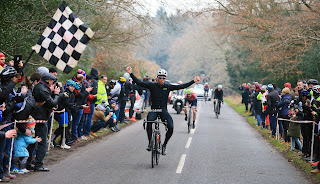 Mick Waite (left in hi-vis) watches on as Chris Opie Wins the 52nd Perfs
‘We have more enquiries than ever now and we are so grateful for all the publicity. That is really important when you are holding an event like this. You don’t want to just say oh, by the way, we’re running this race.
‘I like to think the race has moved with the times. We have embraced everything we need to do to host an event of this nature.
‘And whatever we have picked up from Sunday, we will just sort for next year. We’ll be back!’
Waite admitted it was hard to look past Tim Elverson’s newly-formed UCI Continental set-up of BIKE Channel Canyon for the winner.
But he was pleased to see the professionals given a good workout around Portsdown Hill and reckons that was appreciated as they gear up for a busy season ahead.
Waite added: ‘It’s good they didn’t have it all their own way because maybe other people will look at it and think they can enter and have a go as well. You don’t want everyone to lay down as soon as they see those names on the start sheet and Tim wouldn’t want that either.
‘They must have thought it was a very good workout, which is good news for everyone, and I have thanked Tim for bringing the lads down and supporting the race.
‘While it was difficult to look past BIKE Channel Canyon for the winner, we did pick out Jacob (Vaughan) as one to watch beforehand. Along with Freddie and Louis, he is a quality young rider and they are lovely lads, too. 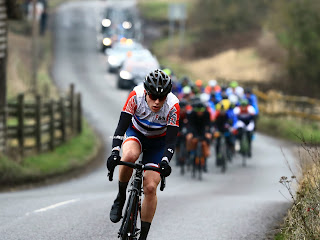 Future prospect Fred Wright
‘I was really pleased for them all. It was good to see them ride and, if they are going to be a world champion or of that level in the future, they have got to be able to do this. It certainly won’t do their GB aspirations any harm.’

on February 13, 2017
Email ThisBlogThis!Share to TwitterShare to FacebookShare to Pinterest