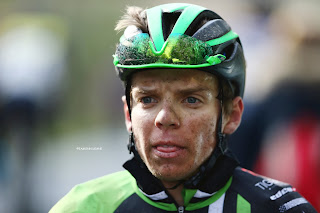 This time last year #mitchforperfs was trending on social media, those in the know bigging up the Pedal Heaven rider for victory in his home race. Webber did not win but put in a solid performance to come second behind Rory Townsend with the promise of more to come. Unfortunately that was as good as it got for the 21 year old, a season blighted by illness & injury left him frustrated on the sidelines. Rob Atkins caught up with Mitch ahead of this years Perfs.............


Mitchell Webber has admitted he would sacrifice Perfs Pedal glory for a campaign free from illness and injury.
The former Andover Wheelers talent will make his BIKE Channel Canyon debut in the Portsmouth event on Sunday (11am).
In what represents his home race, the 21-year-old would dearly love to improve on last year’s second spot and deliver victory in front of friends and family who will be lining the 74km route.
However, after a virus sidelined him for much of 2016, he is determined to make up for lost time.
And he wants repay the loyalty shown in him by sports director Tim Elverson, who took him to BIKE Channel Canyon from Pedal Heaven.
Webber said: ‘I would love to win Perfs. But obviously the team comes first and it is not the be-all and end-all for me this season.
‘I want to have a long season. I don’t want to go well on Sunday and then lose half of the year again. That was horrible.
‘I certainly appreciate it more when I’m fit now and I want to make up for lost time. I want to do everything I couldn’t do last year, like the Ras. I would love to see if I can get in the squad for that.
‘It was nervous times to see if I would be on the team this year. But luckily Tim saw past the illness and I really appreciate that.
‘I definitely want to repay his faith and when you start racing and enjoying it, that’s when good things happen.’
Webber will line-up alongside reigning champion Rory Townsend, 2012 winner Chris Opie, Rob Partridge, James Lowsley-Williams and Alex Richardson on Sunday.
"This winter has been a good one really. It’s has probably been my best yet.
Most winters I seem to pick up something, whether that is illness of injury. But touch wood this one has been all right.Whether I am on better form that ever, I don’t know. Time will tell. But I know I have been more consistent this winter.
Tim will have a team plan and hopefully my legs can go with whatever he has in store for us.It is one of those races which is great if you do well but not the end of the world if you don’t. You have three weeks before the season really gets going. So it doesn’t really matter too much in terms of form but it is a good bit of morale if it goes well."

It will be his third appearance at the race, which features five ascents of Portsdown Hill and finishes on Hundred Acres Road near Wickham.
The former Andover College student added: ‘I know a lot of the people who go down and watch, especially having raced down at the Mountbatten Centre in Pompey.
‘A few of my friends at Andover Wheelers ride down to watch every year and I have watched it over the years.
‘It is one of the few local races we have. I first did it four years ago in the pouring rain when UK Youth dominated and Marcin (Bialoblocki) won it.
‘Luckily - and I mean luckily - I punctured. I have never been so grateful for a puncture in all my life because it was absolutely freezing!
I would love to win it, of course. Mind you, so would 84 other people!You never know when it is going to be your last season, with teams folding everywhere.So I just want to have a long and consistent season."

Mitch Webber leads the field on his Perfs debut in 2013
on February 06, 2017
Email ThisBlogThis!Share to TwitterShare to FacebookShare to Pinterest