Perfs Countdown, Gary Chambers, Back on the Road Again! 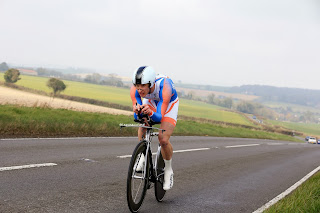 Gary Chambers has chosen the Perfs Pedal to relaunch his road racing career after a five-year break writes Rob Atkins......
The 30-year-old Cornishman, who lives in Fareham, will return to the cut and thrust of the peloton at Southwick on Sunday (11am).
His last outing came in round 11 of the Cornish Series at St Eval in August 2011 before he embarked on a career in the Royal Navy.
Chambers, who hails from Porthleven, was beaten by fellow Cornishman Chris Opie that day.
And the former training partners will lock horns again on Sunday – with Opie set to make his debut for BIKE Channel Canyon.
Chambers, who finished 57th in the British Cycling elite rider rankings in 2011, has represented Fareham Wheelers with aplomb in time trials over the past few seasons.
But with a little more free time now, he insisted entering the Perfs Pedal was a no-brainer.
Chambers, who now rides for Nopinz – the cycle clothing company set up by his former team-mate Blake Pond, said: ‘I haven’t raced on the road since 2011, when I was with Wilier.
‘I joined the navy then and stopped altogether for two-and-a-half years.
‘I then decided to do a few time trials because they are less time consuming with a little family.
‘I’ve just been getting the buzz back and now want to see if I can still do it on the road or not.
‘Perfs is local. It’s only five miles away from me, so it is ideal.
‘Whether I will return to it full-on or not, we’ll see.
‘I will probably stick with time trialling as the mainstay of my season but pick and choose a few good road races here and there.
‘I’ve got great memories of my road racing and that is what is drawing me back in.
‘Winning the Bec CC road race in 2011 was probably my best. I was in a break and mega outnumbered by Felt riders but managed to pull off the win by riding solo for the last 10 miles.’ 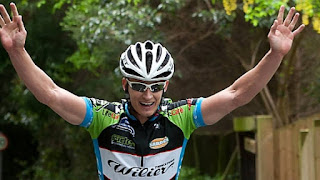 Winning Bec CC road race at Edenbridge
Chambers kicked off his campaign with victory in the South Downs Bikes Sporting TT over 33.8km in West Sussex last weekend.
He clocked 48min 24sec to beat Chris McNamara, who will also race the Perfs Pedal, by 20 seconds.
Chambers added: ‘I was chuffed with that win.
‘I’m not sure how I will fare with the constant changes of pace on Sunday, though.
‘But I think I’ve got good legs and can hold my own, I’ll maybe just lack a bit race craft. I’ll soon find out.
‘I’d like to make the winning break, to be honest.
‘I would like to make that selection and then get heavily outgunned by the BIKE Channel Canyon team!
‘If I could get in the winning move of 10 to 15 riders, that would be good.
‘Anything beyond that would be a bonus.’

on February 10, 2017
Email ThisBlogThis!Share to TwitterShare to FacebookShare to Pinterest