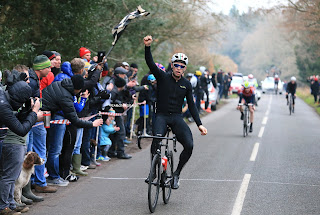 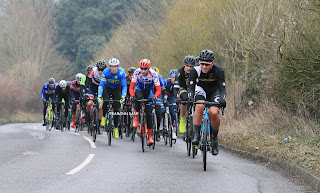 Attacking from the front the first time up Portsdown Hill, the UCI Continental team immediately put pressure on the bunch, all new it was coming, most could do nothing about it. 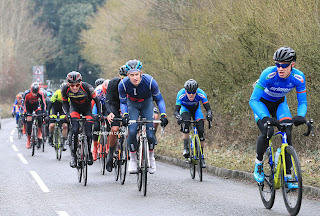 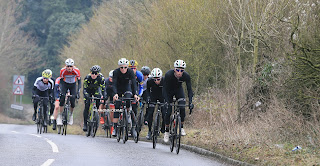 Across the top, into the easterly wind the 13 who remained would decide the race. The chasers were just 12 seconds adrift but it might as well have been an age. Opie, Townsend, Mitch Webber, Rob Partridge, James Lowsley - Williams , Billyard, Chris McNamara (Nuun Sigma Sport London), Louis Rose-Davies, Matthew Clarke, (Canyon UK), ELliot Porter (Neon Velo), Mikey Mottram (Morvelo Basso RT), Jacob Vaghan (VC Londres), Jesse Yates (IN-Gear Quickvit-Trainsharp), would work well together over the next 3 laps of the 47 mile race, stretching the lead to over a minute. Alexander Richardson the only Bike Channel rider not to make the cut, just failing to get on the wheel, his effort leaving him to roll in with the back markers. 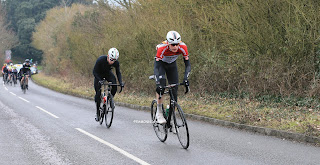 Jack Billyard was the catalyst for the decisive selection, the Dave Rayner funded rider battled illness last year but looked full of riding as he attacked ferociously the penultimate time up the climb. Opie was quickly on the wheel as Porter was forced to chase stringing out the group. 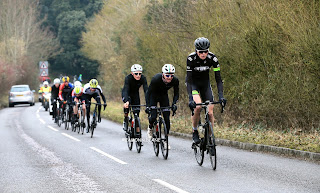 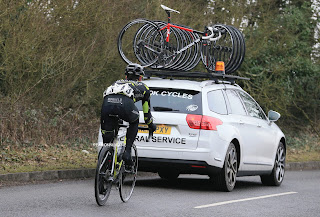 Chasing to, was Mikey Mottram (Morvelo Basso), two punctures had taken him out of the break, he worked hard to regain contact. Over the top, Opie, Townsend, Lowsley-Williams, Billyard and national junior champion, Jacob Vaughan (VC Londres) pulled away as Porter hesitated.The drama continued as Townsend & Lowsley-Williams had a "coming together" taking the latter out of the group. 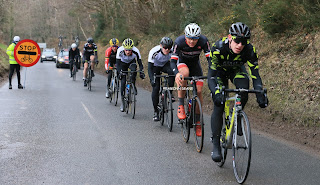 The gap to the remains of the break was only 15 seconds but with Partridge and Webber ready to counter, that was enough. Townsend tried to reprise his move of last year, going away on the descent to Southwick, only this time it did not stick. Into the finale, Billyard, reacting to the closing Partridge, went too early, Townsend tried too but did not have it, Opie did!

The profile of the Perfs Pedal race is bigger than the race itself, run in June it would scarcely make the round-up in reports, in February it is headline news. Opie, Townsend, Webber & co were hot favourites and felt the pressure that came with that, real or hyped up on social media. Racing in all black kit that did nothing for sponsors nor photogaphers, Bike Channel Canyon could be accused as pot hunters, they also could have ended with egg on their faces, they brought little colour to the race but should be applauded for bringing themselves. It is never easy! 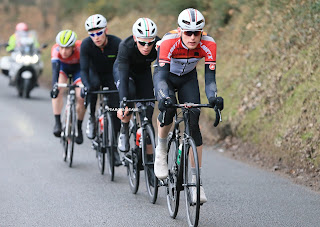 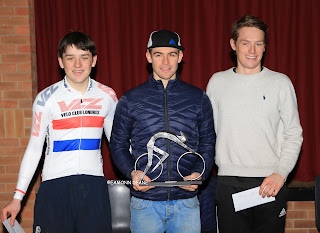 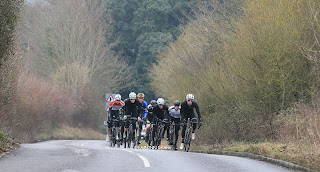 Reaction
Chris Opie
“It did not go quite to plan, we all got our new bikes yesterday, so we are still getting used to them, position and stuff, we all hard sore legs which is not ideal. Because it’s so short you have to go hard from the start Its hard to go hard when it is so cold, Jack Billyard and Jacob Vaughan were riding well, I actually felt a bit sorry for them but that’s racing . Everyone rode to the plan but it was not windy enough, the plan was to ride like a team time trial first time up the climb, we rode hard but it would not break up and its just so short! We sat up a lot in the final because Rob (Partridge) was coming across, it was Jack who started the sprint, Rory went after him but it was a bit early. I won here 5 years ago today and 5 years ago tomorrow my son was born. There would be no pressure if the world of social media did not make a big deal of it, people sit at home saying why do people make a big deal out of Perfs but if teams and the supporters don’t make a big deal of races like this, who’s going to? It’s the only road race in the country this weekend worth doing so you may as well make a big deal out of it. It’s a big event, a fantastic event on a brilliant circuit.”


Jacob Vaughan
"I was really happy with how it went, after last year i kne Bike channel would get on the front and cause a massive split at the start so i made sure i was on the back of them. I felt quite strong, a bit tired mid race but strong at the end. Bike Chanel were driving it with five riders but we worked well together no one was sitting on. We could here them having a few words, we were hoping they weren't going to counter us. Jack (Billyard) went really hard then Rory went, i knew that was the move, i got on the back of Louis Rose-Davis wheel, we just got across. Coming across the top i followed Rory and we got away, Rory went again but we caught him with 5 k to go, me and Jack worked together to pull him back. It was cat & mouse then, Jack attacked, Rory followed, leading out Chris, i thought i was going to come fourth, i am really pleased!"

" I came third in a race i won last year but the important thing is as a team we took the win. The only reason we have be slightly disappointing is, it was almost perfecT, At one stage we had three up the road, the two young lads (Vaugah & Rose-Davies) managed to get to us, massive credit to them, they both rode really well. We had the moves covered, we were comfortable, Jack Billyard rode well as did Jacob Vaughan. I got away at the top of the descent, similar position to last year, at that point i thought it was race over but i could not sustain the power, just did not have the power in the legs but there will be plenty more this season. Jack went to early in the sprint even i did, a bit over confident perhaps"

Jack Billyard
" i am pretty happy with that, its a difficult race to play tactically when you are on your own. Bike channel, you cant fault them, they rode a perfect race, they worked me and Jacob over and got the gap to win the race. Everyone knew the race would go on the climb, i was at the back of the group but very quickly we had a gap and that was that! Its the bit across the top that is the hardest, once you are in the wind its hard, all it takes is one minute of a peloton not wanting to work and thirteen guys doing chaing gang, and thats it, you have got a couple of minutes to make it and if not, thats it. We worked well, nobody sat on, with two laps to go i had to had to do something, i had to have a go, i cant leave it to a sprint. I attacked hard on the climb, after that it was difficult, i wasted energy over the top chasing Chris who had got a gap. In the last kilometre i heard Rory say to Chris, Rob (Partridge) was coming across, i looked back and he was only about 10 seconds back, i panicked a bit and went to early, the boys came round me pretty easily. I am happy with this, the guys at the front are all strong, they are professionals, we've all got bigger races to do, my targets are in April. Its 70k in February, long term it does not mean anything but for the guys getting results its good for morale and for me i was not sure where my form was so to be able to be on the front attacking was good" 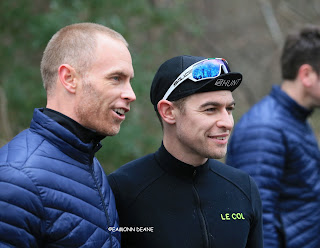 Tim Elverson (DS Bike Channel Canyon)
"We raced hard and learnt a lot about the bikes and our team performance. I was very pleased we took the win, but more importantly very pleased as to how this new team pulled together and bonded early days but the future looks like fun"

Chis McNamara
" Canyon absolutely nailed it, first time up the climb, we knew it was coming i'd had a good warm up, i did not have as good a position as id hoped, i made it by the skin of my teeth. Jack Billy was very strong, he really nailed it up the climb with 2 laps to go, that really split it, i think there was a little bit of panic. We had Mitch Webber and Rob Partidge with us, it was a lose, lose situation"


Elliot Porter " To be honest i am a bit disappointed but thts just the way it is, its a bit too short for me I just need more race fitness, we will see how the next few weeks, i have Severn Bridge and Wally Gimber. I should have been in that front group but thats just down to how i raced, its hindsight"

Mikey Mottram
"Pleased, yeah, yeah definitely, i had a good ride, not bad, i did not think it would be that hard that early on but it was, there were six or seven of them on the front, there was not much talking it was full gas. i knew it would be exposed over the top, i was caught about 20/30 riders further back than i should have been, so just had to put in a really big effort to get across. Itwas hardest over the top in the crosswinds, it was really grippy up there, once i got into that group and had a look round at who was there, you knew it would stick. It was definately hard work, just to get across, the hardest i have had to work for six months! I was really happy to get across, i punctured, i made contact with the remains of the break, we chased but the Bike Channel guys (Webber & Partridge) did well to disrupt the chase,. A good day!" 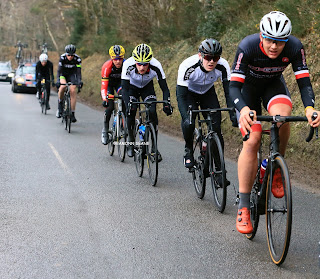 Louis Rose-Davis (17)
"Very pleased, it was good race, i have started the seasion well, it shows what form i have, i had a good feeling but you knever really know. I knew things were going to go down on that first lap, hopefully get in the right position, the road over top was hard with Bike Channel, smashing on the front. After the break was established we all worked well together, I saw Bilyard and Opie get away and i tried to follow but caught in no mans land then the break split in two, i tried to go on my own but they had more power" 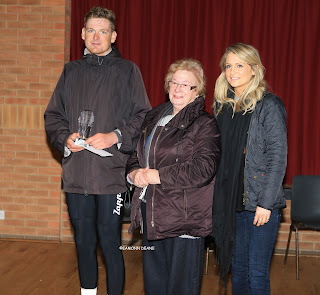 on February 12, 2017
Email ThisBlogThis!Share to TwitterShare to FacebookShare to Pinterest