London to Host Final Stage of Womens Tour of Britain

London will host the final stage of The Women's Tour on Sunday 11 June, as the Mayor of London Sadiq Khan helped Olympic Champion Katie Archibald unveil the route for the 2017 race, which takes place from 7 to 11 June. 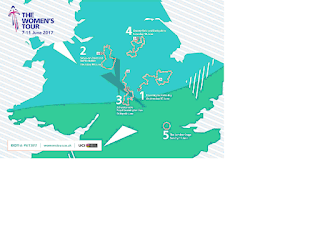 The fourth edition of the world leading race will also include stages in Northamptonshire, Warwickshire, Stoke-on-Trent & Staffordshire and Derbyshire, plus a major new charity partnership with Breast Cancer Care to celebrate 25 years of the pink ribbon.
All of the world's top 15 teams will take part in the race, which is a part of the UCI Women's WorldTour, including the world's number one team Boels Dolmans, of defending race champion Lizzie Deignan, and Wiggle HIGH5, ensuring British fans can again look forward to cheering on the world's best riders. In addition the British-based Drops and WNT teams will complete the 17 team field.

The final stage of The Women's Tour will take place over 14-laps of the same iconic 6-kilometre circuit as used by the men's Tour of Britain, starting and finishing on Regent Street St James and featuring the likes of Piccadilly Circus, Trafalgar Square and Whitehall on every lap.

on February 15, 2017
Email ThisBlogThis!Share to TwitterShare to FacebookShare to Pinterest