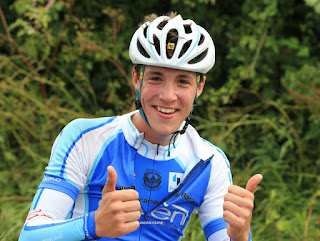 Matt Downie...
"a pretty slow start then nearing the end of the first lap Michael Ford turns to me and tells me to get on his wheel, so of course I did. We managed to get a decent gap pretty quickly, after 2 laps the convoy car was behind us, which was a massive confidence boost. We worked very well together, I think probably because we were both determined to stay away. On the last lap we got told that our lead was 3 mins on the group, but easing up wasn't on either of our minds so we kept going at a pretty rapid pace. Coming into the last corner Mike was pulling off as he just pulled a great turn, so in respect I took up the front, but had my eye on him the majority of the way, as I was winding it up I noticed he started dropping back a bit so I just thought it's now or never and I opened up the sprint, and I managed to keep ahead of him till the line."


on August 21, 2016
Email ThisBlogThis!Share to TwitterShare to FacebookShare to Pinterest