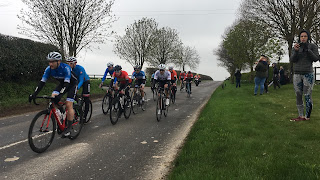 A rustic setting at North Farm in Horton for the second edition of the Sandisons Spring Classic. Early on the weather was holding off and the racers were sent on their way around the fast gently undulating 6.2 mile Woodlands/Horton circuit. The racing was fast from the moment the flag went down and the one small rise up into Haythorn posed little opportunity for any breakaways to form. What that rise did do was set up the stronger riders who continued to push the pace on the gently rising back end of the circuit and apply the pressure to the group, thinning it out with every lap. A small solo break by Nick Clarke, Lovelo Cinelli RT, in which he managed to get a 30 sec lead at one point was snubbed out by the peloton and it came down to a large group for the final lap. Unfortunately there was a minor crash on last lap which led to a number of riders being delayed, but no serious injuries. The final sprint for the line was won by Phillip Cole - Mud, Sweat n Gears CC, who targeted this race and came away with a well-deserved win. A big thank you to Peter Snell at North Farm for hosting the event and to Sandisons.net for their ongoing sponsorship of the event.
Sunday 15th April 2018
1. Phillip Cole - Mud, Sweat n Gears CC
2. Philip Godfrey - Sotonia CC
3. Stuart LeTissier - DHCyclesport
4. Zak Snell - BournemouthCycleworks UK-Biking...
5. Simon Merritt - BournemouthCycleworks UK-Biking...
6. Will Budge - Bristol RC
7. Kieron Goodwin - Latchem Sunwise Race Team
8. Graham Biles - Mud, Sweat n Gears CC
9. Russell Speight - Sotonia CC
10. Paul Hopkins - DHCyclesport
11. James Brown - Tri UK
12. Joe Arundel - Bournemouth Jubilee Wheelers
13. Christopher Brettell - Yeovil CC
14. Paul Ransom - Sotonia CC
15. Mark Valentine - Poole Wheelers CC
16. Harry Chamberlain -
17. Robert Abbey - Lovelo Cinelli RT
18. Nick Clarke - Lovelo Cinelli RT

Thanks to Tom Clements
on April 26, 2018
Email ThisBlogThis!Share to TwitterShare to FacebookShare to Pinterest