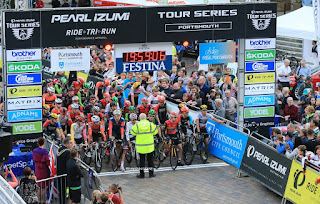 The final round of the OVO Tour series will be in Salisbury on Thursday May 31st. The 8 race, town centre series last visited the South region in 2016 with Portsmouth hosting the final round. (above) Entry to both the mens & womens events is by invitation only, details are live on the British Cycling website HERE More to come...

*The OVO Tour series race at Salisbury is subject to confirmation from Wiltshire County Council. Plans for the race also have to be signed off by the governments anti-terrorism authority, after the recent poisoning of former spy, Sergei Skirpal.
The rest of the 2018 OVO Energy Tour Series dates: