Crossing the line on an empty tank, a breathless Andrew Feather summed up the race in two words “Pedal Heaven!” Feather, who picked up the combativity award, recovered & expanded on his race summary but had already said enough………. 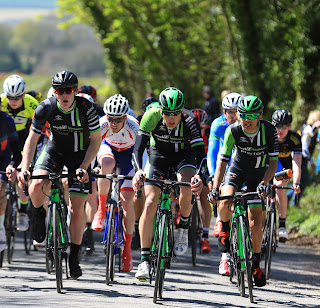 Pedal Heavens monopoly on the race was clear the moment the start list was released, the three man team of Will Fox, Lloyd Chapman & Mitch Webber (Webber withdrew with illness and was replaced by the ever-smiling Max Steadman) had most regarding a finish in the second group a good result.. Rory Townsend won the Perfs Pedal race at the start of the season and, apart from a few hiccups Pedal Heaven has been on the podium every week since. The posh easy-up in the carpark, the sponsored, matching sunglasses, the warm up oil, all can be intimidating at this level but they are no indication of ability, it’s hard training miles that count and hard training miles are available to all. Add in the 5 strong Excel Academy team and it seemed the black & green machine were everywhere but there is certainly no inter-team collusion, you can be sure none of the conti boys want to be beaten by the academy and equally sure the academy lads would love to put one over the big boys! Asked if any words were spoken going into the final, Will Harper of the excel Academy team replied, “No, actually it was pretty quiet on the last lap”

Tactical decisions are certainly easier when one team is so much stronger
“I won’t do anything until Pedal Heaven go, if there not up the road I won’t go” said Ashley Cox (CC Luton)
Oscar Hutchings (Primera-TeamJobs) “I got away early with Andy Feather and Lee Frost, thought it was decent move but none of the Pedal Heaven guys were there”
With power comes responsibility perhaps? In a race full of attacks, all were brought back, all that is except for the first attack that included a Pedal Heaven RT rider, Will Fox put himself in the move that shaped the race about 50 miles in. Of course legs were tiring behind but Fox was never brought back. 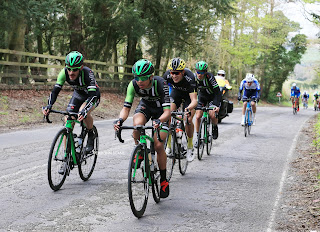 Seventh place finisher Ben Simmons (AIA©DMTCIPOLLINIUK) said
“Pedal Heaven did have an impact on the race but i wouldn't say it was negative, there were a lot of attacks and because of Pedal Heavens strength in numbers they always had someone in the move or getting across to the moves. It was obvious that if you didn't have a Pedal Heaven rider in a move it would get brought back or there would be another group bridging to it.”

Will Fox, Will Harper & Max Steadman were well clear at the end it was not as easy as it looked but as Feather said “The strongest wins”

Last word goes to 19 year old Paul Double of VC Venta who will win this race in the next few years
“I was away with Jon Mould and three of the Pedal Heaven guys, I got a bit excited!

on April 26, 2016
Email ThisBlogThis!Share to TwitterShare to FacebookShare to Pinterest