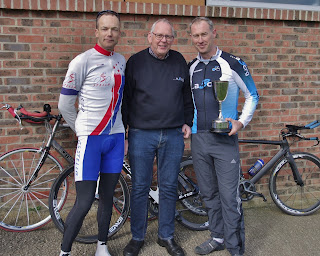 The Sussex CA 2-up on Sunday (17th April) at Washington was an opportunity to present Steve Williamson with the South DC BAR Cup for his performance in 2015.

David Collard-Berry of Steve’s team ...a3crg only received the cup on Friday but as he was at the Sussex Cycling Association 2-up ttt on Sunday it was an ideal time to make sure Steve got the cup.

After Steve received the trophy he started to look at the names on the cup that go back to the fifties with their winning speed. His smile and pride when he saw his name joining with comparable BAR speed (27:536) was evident as he pointed out the previous winners, Gary Dighton, Julian Jenkinson, Mick St Ledger, Glen Longland, Terry Icke, Paul Rogers and E Deane? (whatever happened to him) and team mate & legend Graeme Stirzaker.
We can now expect Steve to be at least 10 seconds faster next week, he is certainly a worthy winner.

Thanks Dave
on April 17, 2016
Email ThisBlogThis!Share to TwitterShare to FacebookShare to Pinterest