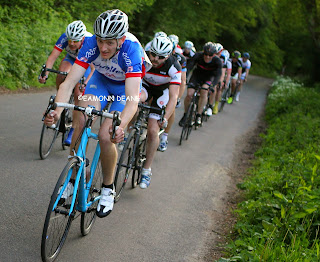 Peter Warner from Bournemouth Jubilee Wheelers won the men’s Banbury Star Road Race. An excellent win for the reserve rider in the oversubscribed race and especially in what is probably the most gruelling event in the regions race calendar.

He was followed by Banbury Star’s own Peter Dumbreck, which was a proud top place for the new Banbury Star Racing Team, who debuted their new kit sponsored by Shutt Velo Rapide and Leisure Lakes. Roger Prior from Zappi’s CC won KOM prize coming first on the leg ripping Knowle twice.