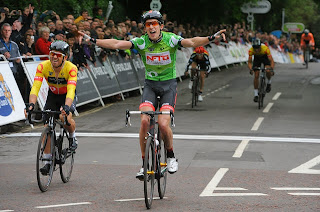 Twelve months on and at the same venue as their last team victory, Raleigh returned to the top step of the podium after an impressive Durham showing, but it was Jon Mould's individual win that took the plaudits.

For the second time in five days the Welsh NFTO rider was involved in a thrilling final sprint with a Rapha Condor JLT rider, but, unlike in Aberystwyth, Mould came out on top, narrowly pipping Graham Briggs for the individual victory, his second of the 2014 Pearl Izumi Tour Series.

The pair had been part of the lead group of riders for much of the race, including perennial Durham favourite Kristian House and Raleigh duo Evan Oliphant and Matthieu Boulo, with all seeming to take their turn off the front at one point or other.

Come the last lap around Durham's tough South Street circuit it was Mould and Briggs who were left in front, with Mould squeezing past Briggs for the victory, to add to his Round One win in Stoke-on-Trent.

The Newport rider was at the front throughout, winning all three Sprints to extend his lead over Briggs in the Sprints jersey to four points.

But NFTO couldn't take the team prize, with next best placed rider Josh Hunt down in 16th position, instead it was Raleigh taking the honours thanks to Boulo outsprinting House for third, and Morgan Kniesky in sixth and Oliphant in ninth making sure of the honours. 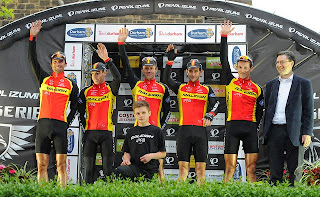 With Liam Stones just outside the top ten in eleventh is was comfortably the best performance yet for the Heron and enough to give them the win over Rapha Condor JLT.

The men in black, although now far more accustomed to wearing the yellow and red of Pearl Izumi, stretch their Pearl Izumi Tour Series lead to 10-points overall as Madison Genesis had an evening to forget. Kiwi duo Mike Northey and Tom Scully took eighth and twelfth, but their all-important third counting rider was Tobyn Horton, way down in 39th.

As a result Madison Genesis finished sixth on the night as several other teams enjoyed their best performances of the 2014 season.

There was also further success for the young Great Britain team, with Chris Lawless recording the Costa Express Fastest Lap, early on in proceedings.

Highlights of the Durham round are on ITV4 at 10pm on Wednesday 28th May, with a repeat at 6.55am on Thursday 29th May.