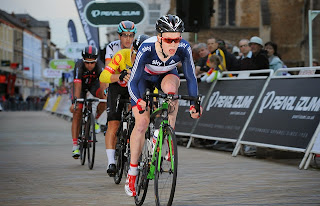 Great Britain's Matthew Gibson took a stylish win with a last lap attack in Peterborough, but it was the riders of Rapha Condor JLT who took the team win to extend their Series lead.
Gibson attacked at the bell from a four-rider breakaway group to win alone in Peterborough city centre, with Adam Blythe coming in second, ahead of Graham Briggs and Mike Northey.

With Felix English and Ed Clancy leading in the bunch for fifth and sixth, Rapha Condor JLT took their second win of the 2014 Series to move into a three point lead at the top of the standings.

Madison Genesis, who placed four in the top ten, took a close second to remain in runners up spot in The Pearl Izumi Tour Series.

English's last lap dash to the line also gave him the evening's Costa Express Fastest Lap, just surpassing Gibson's final lap, which had looked set to give him the Costa Express trophy.
Gibson, Blythe, Briggs and Northey had gone clear midway through the hour long race on The Pearl Izumi Tour Series and worked well together, building and maintaining a lead of over 30-seconds on the peloton.

Then with the bell ringing to herald the last lap Gibson jumped clear and instantly built an unbridgeable margin, which held all the way around the 1.1-kilometre lap.

Behind the celebrating Great Britain rider Adam Blythe crossed the line alone for his best Pearl Izumi Tour Series individual result to date, with Briggs and Northey crossing the line by themselves.

Kiwi Champion Northey actually took third on the road, but was relegated behind Briggs by commissaires after the two clashed in the final corner.

Behind the clear 1-2, NFTO took third to keep them in the Pearl Izumi Tour Series title hunt, while Great Britain could only come sixth, despite taking the individual win.
NFTO also kept hold of the Sprints jersey thanks to Jon Mould, who earned enough points to keep him six points clear of Briggs, with Northey winning the evening's sprint prize in Peterborough.

Highlights of Round Three from Peterborough are shown on ITV4 at 8pm on Wednesday 21st May, with a repeat at 9.55am on Thursday 22nd May.

Round Four sees the Series make its annual trip to Wales for the Aberystwyth round on Friday 23rd May to open the weekend's Aber Cycle Festival, which includes a downhill mountain bike race and the Welsh Wild West sportive. 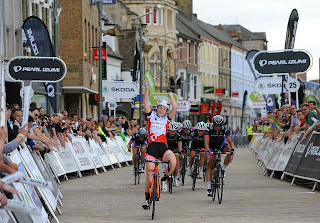 Eileen Roe moved into the lead of the Matrix Fitness Grand Prix Series with victory in Round Two at Peterborough, ensuring she will wear the leader's jersey on home roads in Scotland at Round Three.

Roe now heads a Scottish 1-2 ahead of Charline Joiner as the women's Series heads to Scotland for the first time, with Edinburgh hosting Round Three on Thursday 29th May.

In the absence of opening round winner and leader Katie Archibald, Roe had pulled on the red and white Matrix Fitness jersey in Peterborough as the leading rider racing, and did the jersey proud, firstly attacking and then ultimately winning the final sprint ahead of Nicola Juniper and Harriet Owen.

Victory was Roe's second in the Series, having won the Colchester event in heavy rain in 2012, but this time victory means she takes control of the Series, with a 11-point lead over Joiner.

Freshly back from a long-term injury lay-off, Joiner took sixth, helping her Pearl Izumi Sports Tours International team to a second successive team win, and to extend their series lead.

Second placed Juniper, sixth placed Joiner and Lauren Creamer in eighth secured the points for the team of Dame Sarah Storey, with a fourth black and purple rider, Gabriella Shaw, also in the top ten.

Third on the night was Harriet Owen, on the circuit where she took victory in 2012 the last time the Series visited, while fourth place was Italian Jasmine Diotti, in only her second outing in the Matrix Fitness GP Series.

Roe took the Sprint win on the night, while Louise Mahe took over the Sprints Jersey with the overall lead for Team Mule Bar Girl – Sigma Sport, and Nicola Juniper the evening's combativity prize, after several aggressive moves in the first half of the race.

In addition to the Scottish 1-2 at the top of the standings, riders from north of the border have won both of the opening two rounds, and will be hoping to make it three from three as the women's Series heads to Scotland for the first time next week.

Edinburgh's tough Grassmarket circuit, featuring the cobbled climb of Victoria Street, hosts men and women's events on the afternoon and evening of Thursday 29th May.