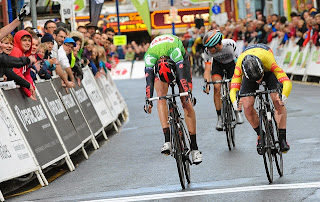 There was a thrilling finish to Aberystwyth's round of The Pearl Izumi Tour Series on Friday evening, as Felix English collected his first ever individual win to help Rapha Condor JLT to their third team win of the 2014 Series.

English took at narrow win at the expense of Jon Mould, who had bridged across to English and Mike Northey, reaching them with a lap to go, but then who couldn't come by English on the drag up to the line.

Behind Northey took third, with Ed Clancy and Tom Scully leading in the remainder of the thirteen riders left on the lead lap in Aberystwyth.

With English's first and Clancy's fourth, Graham Briggs made sure of another team win for Rapha Condor JLT with eighth, a narrow victory thanks to Madison Genesis' third, fifth and ninth, with a spare fourth man also in the top ten.

Going in to Week Three of The Pearl Izumi Tour Series Rapha Condor JLT now enjoy a five point lead over Madison Genesis, cementing an excellent day as Hugh Carthy also took a second place for the squad in the Tour of Japan. 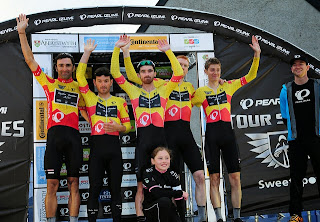 In a race that started in a torrential downpour sweeping in off Cardigan Bay, the field split up early on around Aberystwyth's technical circuit, with a group of thirteen rider splitting away from the main field.

As the rest of the field splintered the lucky thirteen powered clear until English and Northey made their move at the front at the second Sprint, with English collecting the Costa Express Fastest Lap on the way.

The duo worked up a 10-second lead, and despite repeated attempts by Scully, Yanto Barker and Tobyn Horton to bridge across, the two looked like contesting the individual win alone.

That was without taking into account Sprints leader Mould, who put in a massive effort with just over two laps to go to ride across to English and Northey alone. On home roads the Welshman was then neck and neck with English up Pier Street to the finish line, with the Rapha Condor JLT just prevailing.

Mould's consolation was keeping the Sprints jersey that he collected at Round One in Stoke-on-Trent, but now the NFTO rider's lead is down to just one point over Briggs, with Northey and Scully also both showing a keen interest in the competition.

At the top of the standings that matter though it is Rapha Condor JLT leading the way, keeping the red and yellow leader jerseys with a healthy five point advantage over Madison Genesis.
They in turn have an eight point margin over NFTO Pro Cycling who took third on the night in Aberystwyth.

Highlights from Aberystwyth will be shown on ITV4 at 8pm on Monday 26th May, with a repeat at 7am on Tuesday 27th May.

Round Five of The Pearl Izumi Tour Series heralds a tough week for the nine teams, with Durham's cobbled climb featuring on Tuesday (27th May) before an equally tough circuit around Edinburgh's Grassmarket, including the cobbled Victoria Street climb on Thursday (29th May) for Round Six, the first to be held in Scotland's capital city.

on May 24, 2014
Email ThisBlogThis!Share to TwitterShare to FacebookShare to Pinterest