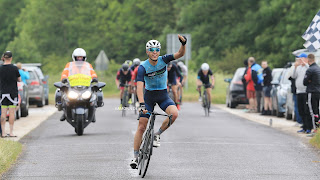 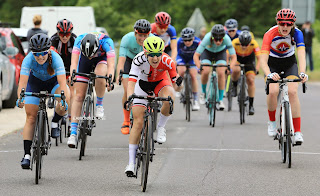 Ashton claimed her 3rd title in 4 years, the 31 year old from Jersey, sprinting to victory in warm sunshine, (they said she couldn’t sprint). While 20 year old Jack Freeman from Alton, Hants took an emotional win in the wind and rain, embracing Mum, Julie, at the finish (or was it the other way round?) as he celebrated winning a title that means something! 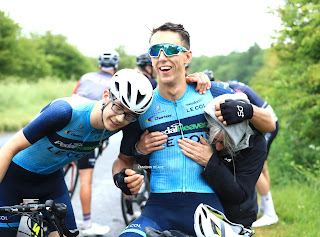 Ashton had soloed to victory in 2015 and again in 2017 and a recent "under the hour" 25 on the Island suggested more of the same but she showed more than a little guile, winning the fiercely contested headwind gallop ahead of the effervescent Jenny Holden (Campinensie-Velo Performance) & the junior-gear riding, 17 year old Caitlin Peters (Story Racing).The women's race incorporated the South West championship with Emma Cockcroft (Bianchi Dama) getting the nod ahaed of teammate Natasha Reddy, a shame just a few more did not make the journey east. 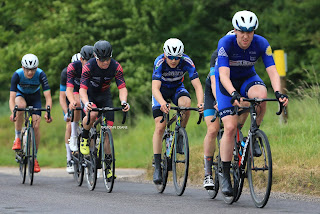 Freeman has been in good form but the title was disappearing rapidly up the road as Alexander Cross (Meudon Pedal Heaven RT), George Smith, Chris Rothwell (Nopinz Symec RT),James Roe , Michael Serafin(Team Estera), Nicholas Tyrie (Primera-Teamjobs) & Thomas Bowering (Activeedge RT) pulled out a lead of nearly 3 minutes, the wind and rain helping the break more than the bunch. The 20 kilometre circuit based around Chitterne on Salisbury plain started to ask questions that the 7 could not answer and with 1 lap of the 80 mile race remaining Freeman was back in the game. He made his move at the flame rouge, the rest couldn’t or wouldn’t follow and the title was secure, if there was any doubt the NEG rider alongside confirmed it telling Freeman “You’ve got this”. Hayden Burton (SixtysixRSN) edged out Red Walters (Vitus Pro Cycling p/b Brother UK) for the silver medal, to make it a trio of 20 year old's on the podium. Ashton, like Freeman has been in good form but was unable to break away, her trademark escape always closed down. 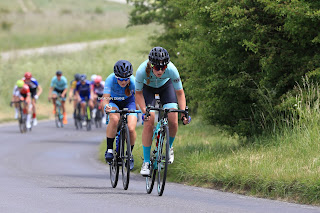 Holden & Reddy briefly held a gap of 13 secs but the bell was ringing and Ashton was leading the chase and the 55 mile race was altogether going into the finale. The key to success in the uphill, headwind gallop was not to go to early,brinkmanship! Ashton waited and waited till it mattered, it was close but that only made it better. Freeman also had to be patient, the 7 man move that had gone clear two hours into the race looked to have done enough to stay away. 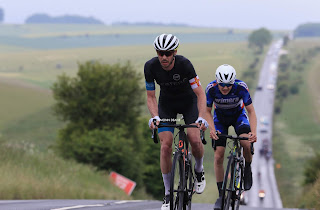 Driven first by Roe & Tyrie, then the added horsepower of Bowering, they worked hard into the worsening weather, perhaps too hard? At the bell the cracks were showing, the weather that was helpful now not, the gap was dropping as Rothwell and Roe were pulling away and half a lap later it was all over for the break. 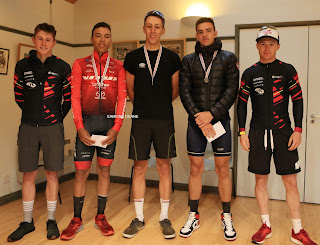 Rider Reaction
Kimberley Ashton “(Champion) Again! I think my training must be working, I am going really well this year and have knuckled down with my training, since the Commonwealth Games last year, I kind of thought I will just do it for fun and when you do it for fun and are happy you seem to go quite well. I tried to attack early on but everyone was chasing, not just myself but anyone who tried to get away. Luckily the sprint is uphill and into the wind, coming from Jersey I am used to the wind and knew where to position myself, I like a tough course”

Jack Freeman “We were 3 minutes down with two laps to go and there were a lot of people unable to work in the wind. I thought the race was gone, there were seven up the road and I had resigned myself to a top ten. At the bell the gap was down to one minute, we knew we could do it, it was a last ditch effort. I went with about a “K” to go, I knew I could not take Red (Walters) to the line. I looked back once and had about ten metre's. The South Championships has been a really big target for me all year, its my first National B win so its been huge for me, a big season goal”

Jennifer Holden
“If there had just been two more metre's........i recce’d the course in the week, I knew not to go to early, its so tempting to go early. I kept trying to get away, we tried hard but everyone seemed to want it to stay together and the wind made it tough, it was a grippy course rather than hard, the hills are not long enough or steep enough”

Hayden Burton
“Not too bad, it was a pretty hard day, the weather made it hard. We kept pushing we knew the break were finding it tough out there. Miles (Burton) and myself were pushing hard. Jack went with a K to go, I was on the front, we let him go, it was a bit of a mistake really. Miles pulled on the front for thirty seconds or so but we couldn’t get him back”

Caitlin Peters
“Its good, unfortunately I just went a bit too early, the wind was picking up each lap. I did not feel great in the race but I am pleased. The rolling circuit made it fast, they were telling me to come through but it was hard on my junior cassette. I am very happy with a podium finish”
Red Walters
“ I put a few digs in early on but people were chasing, the break had a big gap but we kept working. At the finish I knew if i reacted it would not go well for me, the SixtSixty guys would follow, I was not going to react immediately, I was tempted” 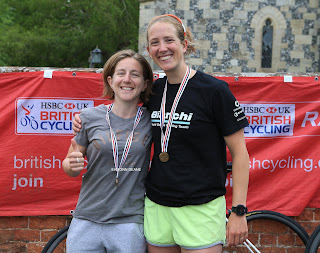 
on June 02, 2019
Email ThisBlogThis!Share to TwitterShare to FacebookShare to Pinterest