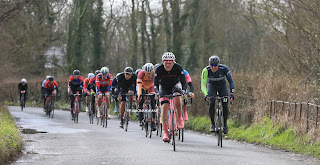 Second Cat rider Andy Critchlow (WyndyMilla) has been around a while and loves grassroots racing. The 43 year old from Reigate in Surrey gives us his view of the Severn Bridge Road Race
"Hills hurt legs but cross winds did the real damage at the 45th edition of the Severn Bridge road race on Sunday. I was warned in advance by local ex-professional rider Rob Lyne that the new course for the event was brutal because of the climb up to King’s Weston House which we hit nine times. Rob was right about the tough parcours but wrong about the reasons for the hard race.

The Severn Bridge, excellently organized by Bristol Road Club, is an early season classic on the domestic calendar which always attracts a strong field. This year was no exception with the start list packed with domestic UCI pros from squads such as Team Wiggins and Bike Channel Canyon joined by top elite teams including Catford Equipe and Spirit Tifosi, which produced the eventual winner.

Predictably the weather was grim as we approached the climb for the first time but it was the long straight road through the Avonmouth industrial area where the carnage was caused by a savage cross wind, which gained in strength as the race developed. Gusting from the south west the blustery weather quickly forced the bunch of 80 riders into the left-hand gutter and created the conditions for the winning move of six to pull away on the 9.1 percent ascent of the ridge overlooking the River Severn. It felt like Belgium.

By the middle of the race riders were starting to really suffer on this section of the course and wheels started to slip. Inevitably, as the field strung out someone touched wheels and about nine riders hit the deck hard causing a small split. This crash changed the complexion of the race as it took out Neon Velo’s Elliott Porter – one of the strongest riders in the field – and his experienced team mate William Bjergfelt. Without a man in the break their absence took the momentum out of the chase, which had pegged the leaders back to just over a minute gap at that point.

The wind also made the hill seem even harder by sapping energy and momentum just before we hit it. With three laps to go the bunch started to fragment each time over the top but still no one stopped chasing, which made for some fast 31-mph chases through Hallen. In these conditions the break did an incredible ride to stay away and chapeau to the winner Edward Clemens, who has a big year ahead. Honorable mention should also go to Matt Langworthy, who finished second. He is another strong rider to emerge from the Mid Devon CC talent factory.

As for my race. I survived and still had the legs to put in a big effort in the sprint on the final climb to roll in 30th. No disgrace for a 43-year-old in a field of this quality after I had raced 60 miles the day before and a solid weekend of race miles in the bag to kick off my 2017 season." 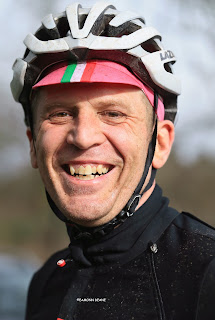 on March 06, 2017
Email ThisBlogThis!Share to TwitterShare to FacebookShare to Pinterest